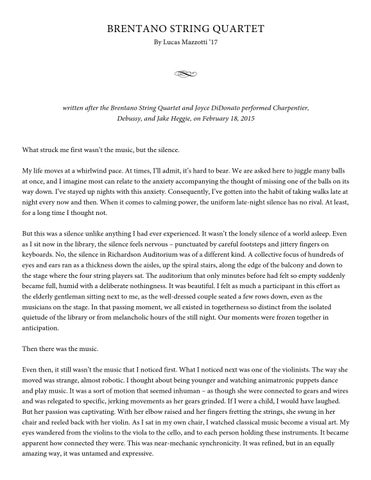 What struck me first wasn’t the music, but the silence. My life moves at a whirlwind pace. At times, I’ll admit, it’s hard to bear. We are asked here to juggle many balls at once, and I imagine most can relate to the anxiety accompanying the thought of missing one of the balls on its way down. I’ve stayed up nights with this anxiety. Consequently, I’ve gotten into the habit of taking walks late at night every now and then. When it comes to calming power, the uniform late-night silence has no rival. At least, for a long time I thought not. But this was a silence unlike anything I had ever experienced. It wasn’t the lonely silence of a world asleep. Even as I sit now in the library, the silence feels nervous – punctuated by careful footsteps and jittery fingers on keyboards. No, the silence in Richardson Auditorium was of a different kind. A collective focus of hundreds of eyes and ears ran as a thickness down the aisles, up the spiral stairs, along the edge of the balcony and down to the stage where the four string players sat. The auditorium that only minutes before had felt so empty suddenly became full, humid with a deliberate nothingness. It was beautiful. I felt as much a participant in this effort as the elderly gentleman sitting next to me, as the well-dressed couple seated a few rows down, even as the musicians on the stage. In that passing moment, we all existed in togetherness so distinct from the isolated quietude of the library or from melancholic hours of the still night. Our moments were frozen together in anticipation. Then there was the music. Even then, it still wasn’t the music that I noticed first. What I noticed next was one of the violinists. The way she moved was strange, almost robotic. I thought about being younger and watching animatronic puppets dance and play music. It was a sort of motion that seemed inhuman – as though she were connected to gears and wires and was relegated to specific, jerking movements as her gears grinded. If I were a child, I would have laughed. But her passion was captivating. With her elbow raised and her fingers fretting the strings, she swung in her chair and reeled back with her violin. As I sat in my own chair, I watched classical music become a visual art. My eyes wandered from the violins to the viola to the cello, and to each person holding these instruments. It became apparent how connected they were. This was near-mechanic synchronicity. It was refined, but in an equally amazing way, it was untamed and expressive.

This essay was written after the Brentano String Quartet and Joyce DiDonato performed Charpentier, Debussy, and Jake Heggie at Princeton on February 18, 2015. It was entered into the Creative Reactions Contest and won Second Prize. 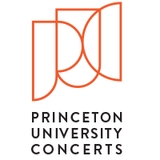