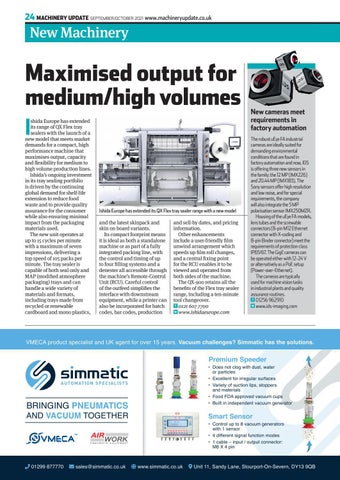 Maximised output for medium/high volumes I

shida Europe has extended its range of QX Flex tray sealers with the launch of a new model that meets market demands for a compact, high performance machine that maximises output, capacity and flexibility for medium to high volume production lines. Ishida’s ongoing investment in its tray sealing portfolio is driven by the continuing global demand for shelf-life extension to reduce food waste and to provide quality assurance for the consumer while also ensuring minimal impact from the packaging materials used. The new unit operates at up to 15 cycles per minute with a maximum of seven impressions, delivering a top speed of 105 packs per minute. The tray sealer is capable of both seal only and MAP (modified atmosphere packaging) trays and can handle a wide variety of materials and formats, including trays made from recycled or renewable cardboard and mono plastics,

and the latest skinpack and skin on board variants. Its compact footprint means it is ideal as both a standalone machine or as part of a fully integrated packing line, with the control and timing of up to four filling systems and a denester all accessible through the machine’s Remote-Control Unit (RCU). Careful control of the outfeed simplifies the interface with downstream equipment, while a printer can also be incorporated for batch codes, bar codes, production

and sell-by dates, and pricing information. Other enhancements include a user-friendly film unwind arrangement which speeds up film roll changes, and a central fixing point for the RCU enables it to be viewed and operated from both sides of the machine. The QX-900 retains all the benefits of the Flex tray sealer range, including a ten-minute tool changeover. T 0121 607 7700 W www.ishidaeurope.com

New cameras meet requirements in factory automation The robust uEye FA industrial cameras are ideally suited for demanding environmental conditions that are found in factory automation and now, IDS is offering three new sensors in the family: the 12 MP (IMX226) and 20.44 MP (IMX183). The Sony sensors offer high resolution and low noise, and for special requirements, the company will also integrate the 5 MP polarisation sensor IMX250MZR. Housing of the uEye FA models, lens tubes and the screwable connectors (8-pin M12 Ethernet connector with X-coding and 8-pin Binder connector) meet the requirements of protection class IP65/67. The GigE cameras can be operated either with 12-24 V or alternatively as a PoE setup (Power-over-Ethernet). The cameras are typically used for machine vision tasks in industrial plants and quality assurance routines. T 01256 962910 W www.ids-imaging.com