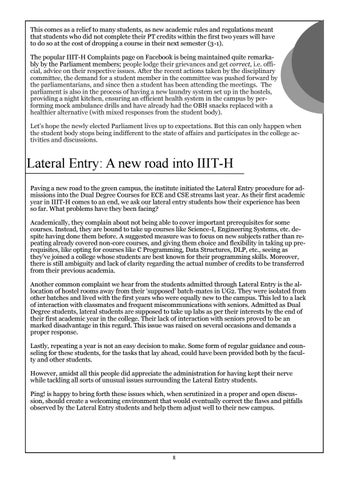 This comes as a relief to many students, as new academic rules and regulations meant  that students who did not complete their PT credits within the first two years will have  to do so at the cost of dropping a course in their next semester (3-1). The popular IIIT-H Complaints page on Facebook is being maintained quite remarka­ bly by the Parliament members; people lodge their grievances and get correct, i.e. offi­ cial, advice on their respective issues. After the recent actions taken by the disciplinary  committee, the demand for a student member in the committee was pushed forward by  the parliamentarians, and since then a student has been attending the meetings.  The  parliament is also in the process of having a new laundry system set up in the hostels,  providing a night kitchen, ensuring an efficient health system in the campus by per­ forming mock ambulance drills and have already had the OBH snacks replaced with a  healthier alternative (with mixed responses from the student body).   Let’s hope the newly elected Parliament lives up to expectations. But this can only happen when  the student body stops being indifferent to the state of affairs and participates in the college ac­ tivities and discussions.

Lateral Entry: A new road into IIIT-H  Paving a new road to the green campus, the institute initiated the Lateral Entry procedure for ad­ missions into the Dual Degree Courses for ECE and CSE streams last year. As their first academic  year in IIIT-H comes to an end, we ask our lateral entry students how their experience has been  so far. What problems have they been facing? Academically, they complain about not being able to cover important prerequisites for some  courses. Instead, they are bound to take up courses like Science-I, Engineering Systems, etc. de­ spite having done them before. A suggested measure was to focus on new subjects rather than re­ peating already covered non-core courses, and giving them choice and flexibility in taking up pre­ requisites, like opting for courses like C Programming, Data Structures, DLP, etc., seeing as  they’ve joined a college whose students are best known for their programming skills. Moreover,  there is still ambiguity and lack of clarity regarding the actual number of credits to be transferred  from their previous academia. Another common complaint we hear from the students admitted through Lateral Entry is the al­ location of hostel rooms away from their ‘supposed’ batch-mates in UG2. They were isolated from  other batches and lived with the first years who were equally new to the campus. This led to a lack  of interaction with classmates and frequent miscommunications with seniors. Admitted as Dual  Degree students, lateral students are supposed to take up labs as per their interests by the end of  their first academic year in the college. Their lack of interaction with seniors proved to be an  marked disadvantage in this regard. This issue was raised on several occasions and demands a  proper response. Lastly, repeating a year is not an easy decision to make. Some form of regular guidance and coun­ seling for these students, for the tasks that lay ahead, could have been provided both by the facul­ ty and other students. However, amidst all this people did appreciate the administration for having kept their nerve  while tackling all sorts of unusual issues surrounding the Lateral Entry students. Ping! is happy to bring forth these issues which, when scrutinized in a proper and open discus­ sion, should create a welcoming environment that would eventually correct the flaws and pitfalls  observed by the Lateral Entry students and help them adjust well to their new campus.