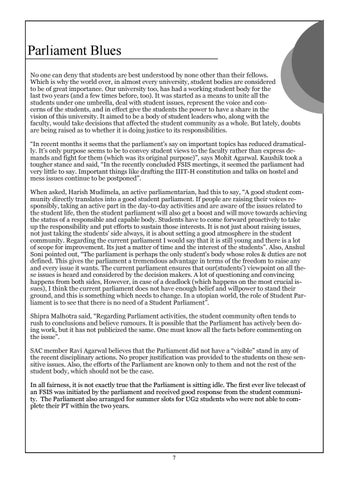 Parliament Blues No one can deny that students are best understood by none other than their fellows.  Which is why the world over, in almost every university, student bodies are considered  to be of great importance. Our university too, has had a working student body for the  last two years (and a few times before, too). It was started as a means to unite all the  students under one umbrella, deal with student issues, represent the voice and con­ cerns of the students, and in effect give the students the power to have a share in the  vision of this university. It aimed to be a body of student leaders who, along with the  faculty, would take decisions that affected the student community as a whole. But lately, doubts  are being raised as to whether it is doing justice to its responsibilities. “In recent months it seems that the parliament’s say on important topics has reduced dramatical­ ly. It’s only purpose seems to be to convey student views to the faculty rather than express de­ mands and fight for them (which was its original purpose)”, says Mohit Agarwal. Kaushik took a  tougher stance and said, “In the recently concluded FSIS meetings, it seemed the parliament had  very little to say. Important things like drafting the IIIT-H constitution and talks on hostel and  mess issues continue to be postponed”. When asked, Harish Mudimela, an active parliamentarian, had this to say, “A good student com­ munity directly translates into a good student parliament. If people are raising their voices re­ sponsibly, taking an active part in the day-to-day activities and are aware of the issues related to  the student life, then the student parliament will also get a boost and will move towards achieving  the status of a responsible and capable body. Students have to come forward proactively to take  up the responsibility and put efforts to sustain those interests. It is not just about raising issues,  not just taking the students' side always, it is about setting a good atmosphere in the student  community. Regarding the current parliament I would say that it is still young and there is a lot  of scope for improvement. Its just a matter of time and the interest of the students”. Also, Anshul  Soni pointed out, “The parliament is perhaps the only student's body whose roles & duties are not  defined. This gives the parliament a tremendous advantage in terms of the freedom to raise any  and every issue it wants. The current parliament ensures that our(students’) viewpoint on all the­ se issues is heard and considered by the decision makers. A lot of questioning and convincing  happens from both sides, However, in case of a deadlock (which happens on the most crucial is­ sues), I think the current parliament does not have enough belief and willpower to stand their  ground, and this is something which needs to change. In a utopian world, the role of Student Par­ liament is to see that there is no need of a Student Parliament”. Shipra Malhotra said, “Regarding Parliament activities, the student community often tends to  rush to conclusions and believe rumours. It is possible that the Parliament has actively been do­ ing work, but it has not publicized the same. One must know all the facts before commenting on  the issue”. SAC member Ravi Agarwal believes that the Parliament did not have a “visible” stand in any of  the recent disciplinary actions. No proper justification was provided to the students on these sen­ sitive issues. Also, the efforts of the Parliament are known only to them and not the rest of the  student body, which should not be the case. In all fairness, it is not exactly true that the Parliament is sitting idle. The first ever live telecast of  an FSIS was initiated by the parliament and received good response from the student communi­ ty.  The Parliament also arranged for summer slots for UG2 students who were not able to com­ plete their PT within the two years.