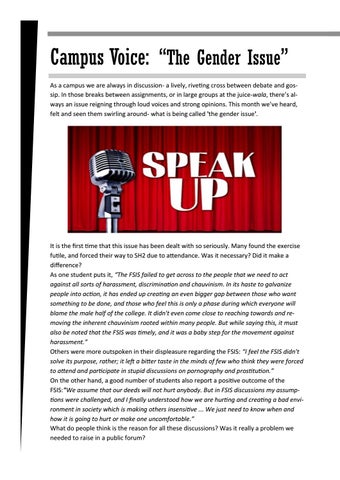 Campus Voice: “The Gender Issue” As a campus we are always in discussion- a lively, riveting cross between debate and gossip. In those breaks between assignments, or in large groups at the juice-wala, there’s always an issue reigning through loud voices and strong opinions. This month we’ve heard, felt and seen them swirling around- what is being called 'the gender issue'.

It is the first time that this issue has been dealt with so seriously. Many found the exercise futile, and forced their way to SH2 due to attendance. Was it necessary? Did it make a difference? As one student puts it, “The FSIS failed to get across to the people that we need to act against all sorts of harassment, discrimination and chauvinism. In its haste to galvanize people into action, it has ended up creating an even bigger gap between those who want something to be done, and those who feel this is only a phase during which everyone will blame the male half of the college. It didn't even come close to reaching towards and removing the inherent chauvinism rooted within many people. But while saying this, it must also be noted that the FSIS was timely, and it was a baby step for the movement against harassment.” Others were more outspoken in their displeasure regarding the FSIS: “I feel the FSIS didn't solve its purpose, rather; it left a bitter taste in the minds of few who think they were forced to attend and participate in stupid discussions on pornography and prostitution.” On the other hand, a good number of students also report a positive outcome of the FSIS:"We assume that our deeds will not hurt anybody. But in FSIS discussions my assumptions were challenged, and I finally understood how we are hurting and creating a bad environment in society which is making others insensitive ... We just need to know when and how it is going to hurt or make one uncomfortable.” What do people think is the reason for all these discussions? Was it really a problem we needed to raise in a public forum?