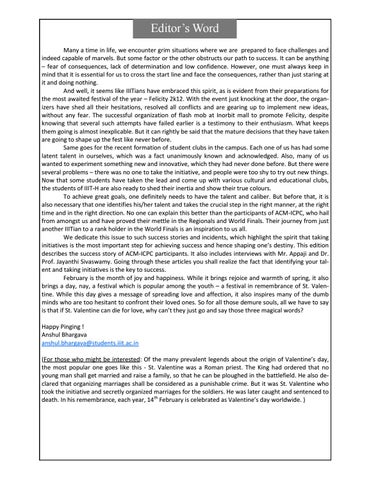 Editor’s Word Many a time in life, we encounter grim situations where we are prepared to face challenges and indeed capable of marvels. But some factor or the other obstructs our path to success. It can be anything – fear of consequences, lack of determination and low confidence. However, one must always keep in mind that it is essential for us to cross the start line and face the consequences, rather than just staring at it and doing nothing. And well, it seems like IIITians have embraced this spirit, as is evident from their preparations for the most awaited festival of the year – Felicity 2k12. With the event just knocking at the door, the organizers have shed all their hesitations, resolved all conflicts and are gearing up to implement new ideas, without any fear. The successful organization of flash mob at Inorbit mall to promote Felicity, despite knowing that several such attempts have failed earlier is a testimony to their enthusiasm. What keeps them going is almost inexplicable. But it can rightly be said that the mature decisions that they have taken are going to shape up the fest like never before. Same goes for the recent formation of student clubs in the campus. Each one of us has had some latent talent in ourselves, which was a fact unanimously known and acknowledged. Also, many of us wanted to experiment something new and innovative, which they had never done before. But there were several problems – there was no one to take the initiative, and people were too shy to try out new things. Now that some students have taken the lead and come up with various cultural and educational clubs, the students of IIIT-H are also ready to shed their inertia and show their true colours. To achieve great goals, one definitely needs to have the talent and caliber. But before that, it is also necessary that one identifies his/her talent and takes the crucial step in the right manner, at the right time and in the right direction. No one can explain this better than the participants of ACM-ICPC, who hail from amongst us and have proved their mettle in the Regionals and World Finals. Their journey from just another IIITian to a rank holder in the World Finals is an inspiration to us all. We dedicate this issue to such success stories and incidents, which highlight the spirit that taking initiatives is the most important step for achieving success and hence shaping one’s destiny. This edition describes the success story of ACM-ICPC participants. It also includes interviews with Mr. Appaji and Dr. Prof. Jayanthi Sivaswamy. Going through these articles you shall realize the fact that identifying your talent and taking initiatives is the key to success. February is the month of joy and happiness. While it brings rejoice and warmth of spring, it also brings a day, nay, a festival which is popular among the youth – a festival in remembrance of St. Valentine. While this day gives a message of spreading love and affection, it also inspires many of the dumb minds who are too hesitant to confront their loved ones. So for all those demure souls, all we have to say is that if St. Valentine can die for love, why can’t they just go and say those three magical words? Happy Pinging ! Anshul Bhargava anshul.bhargava@students.iiit.ac.in (For those who might be interested: Of the many prevalent legends about the origin of Valentine’s day, the most popular one goes like this - St. Valentine was a Roman priest. The King had ordered that no young man shall get married and raise a family, so that he can be ploughed in the battlefield. He also declared that organizing marriages shall be considered as a punishable crime. But it was St. Valentine who took the initiative and secretly organized marriages for the soldiers. He was later caught and sentenced to death. In his remembrance, each year, 14th February is celebrated as Valentine’s day worldwide. )