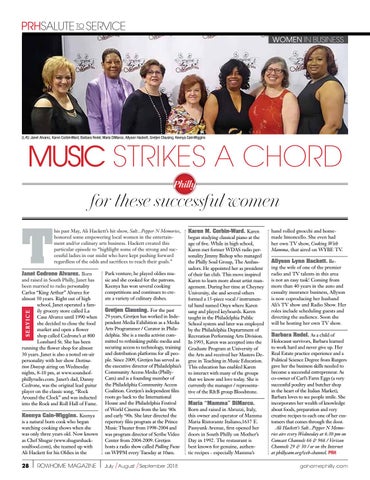 for these successful women

his past May, Ali Hackett’s hit show, Salt...Pepper N Memories, honored some empowering local women in the entertainment and/or culinary arts business. Hackett created this particular episode to “highlight some of the strong and successful ladies in our midst who have kept pushing forward regardless of the odds and sacrifices to reach their goals.”

Janet Cedrone Alvarez. Born and raised in South Philly, Janet has been married to radio personality Carlos “King Arthur” Alvarez for almost 50 years. Right out of high school, Janet operated a family grocery store called La Casa Alvarez until 1990 when she decided to close the food market and open a flower shop called Cedrone’s at 800 Lombard St. She has been running the flower shop for almost 30 years. Janet is also a noted on-air personality with her show Destination Doowop airing on Wednesday nights, 8-10 pm, at www.soundsofphillyradio.com. Janet’s dad, Danny Cedrone, was the original lead guitar player on the classic song, “Rock Around the Clock” and was inducted into the Rock and Roll Hall of Fame. Keenya Cain-Wiggins. Keenya is a natural born cook who began watching cooking shows when she was only three years old. Now known as Chef Shugar (www.shugarshacksoulfood.com), she teamed up with Ali Hackett for his Oldies in the

Park venture; he played oldies music and she cooked for the patrons. Keenya has won several cooking competitions and continues to create a variety of culinary dishes. Gretjen Clausing. For the past 29 years, Gretjen has worked in Independent Media Exhibition as a Media Arts Programmer / Curator in Philadelphia. She is a media activist committed to rethinking public media and securing access to technology, training and distribution platforms for all people. Since 2009, Gretjen has served as the executive director of Philadelphia’s Community Access Media (PhillyCam) and is a founding member of the Philadelphia Community Access Coalition. Gretjen’s independent film roots go back to the International House and the Philadelphia Festival of World Cinema from the late ‘80s and early ‘90s. She later directed the repertory film program at the Prince Music Theater from 1998-2004 and was program director of Scribe Video Center from 2004-2009. Gretjen hosts a radio show called Pulling Focus on WPPM every Tuesday at 10am.

Karen M. Corbin-Ward. Karen began studying classical piano at the age of five. While in high school, Karen met former WDAS radio personality Jimmy Bishop who managed the Philly Soul Group, The Ambassadors. He appointed her as president of their fan club. This move inspired Karen to learn more about artist management. During her time at Cheyney University, she and several others formed a 15-piece vocal / instrumental band named Onyx where Karen sang and played keyboards. Karen taught in the Philadelphia Public School system and later was employed by the Philadelphia Deptartment of Recreation Performing Arts Division. In 1993, Karen was accepted into the Graduate Program at University of the Arts and received her Masters Degree in Teaching in Music Education. This education has enabled Karen to interact with many of the groups that we know and love today. She is currently the manager / representative of the R&B group Bloodstone. Maria “Mamma” DiMarco. Born and raised in Abruzzi, Italy, this owner and operator of Mamma Maria Ristorante Italiano,1637 E. Passyunk Avenue, first opened her doors in South Philly on Mother’s Day in 1992. The restaurant is best known for genuine, authentic recipes - especially Mamma’s

hand rolled gnocchi and homemade limoncello. She even had her own TV show, Cooking With Mamma, that aired on WYBE TV. Allyson Lynn Hackett. Being the wife of one of the premier radio and TV talents in this area is not an easy task! Coming from more than 40 years in the auto and casualty insurance business, Allyson is now coproducing her husband Ali’s TV show and Radio Show. Her roles include scheduling guests and directing the audience. Soon she will be hosting her own TV show. Barbara Redel. As a child of Holocaust survivors, Barbara learned to work hard and never give up. Her Real Estate practice experience and a Political Science Degree from Rutgers gave her the business skills needed to become a successful entrepreneur. As co-owner of Carl’s Farm Eggs (a very successful poultry and butcher shop in the heart of the Italian Market), Barbara loves to see people smile. She incorporates her wealth of knowledge about foods, preparation and very creative recipes to each one of her customers that comes through the door. Ali Hackett’s Salt...Pepper N Memories airs every Wednesday at 6:30 pm on Comcast Channels 66 & 966 / Verizon Channels 29 & 30 / or on the Internet at phillycam.org/web-channel. PRH gohomephilly.com

Our annual summer issue featuring our favorite things to explore (and eat!) in our city!

Our annual summer issue featuring our favorite things to explore (and eat!) in our city!