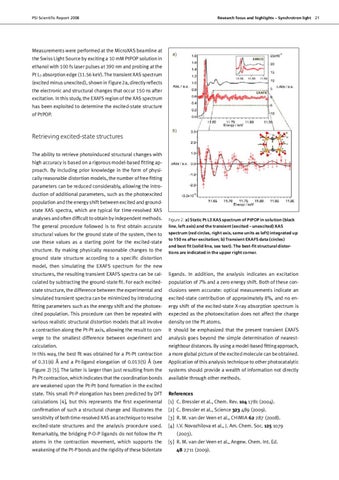 Measurements were performed at the MicroXAS beamline at the Swiss Light Source by exciting a 10 mM PtPOP solution in ethanol with 100 fs laser pulses at 390 nm and probing at the Pt L3 absorption edge (11.56 keV). The transient XAS spectrum (excited minus unexcited), shown in Figure 2a, directly reflects the electronic and structural changes that occur 150 ns after excitation. In this study, the EXAFS region of the XAS spectrum has been exploited to determine the excited-state structure of PtPOP.

Retrieving excited-state structures The ability to retrieve photoinduced structural changes with high accuracy is based on a rigorous model-based fitting approach. By including prior knowledge in the form of physically reasonable distortion models, the number of free fitting parameters can be reduced considerably, allowing the introduction of additional parameters, such as the photoexcited population and the energy shift between excited and groundstate XAS spectra, which are typical for time-resolved XAS analyses and often difficult to obtain by independent methods.

The general procedure followed is to first obtain accurate

structural values for the ground state of the system, then to

use these values as a starting point for the excited-state structure. By making physically reasonable changes to the

ground state structure according to a specific distortion model, then simulating the EXAFS spectrum for the new structures, the resulting transient EXAFS spectra can be cal-

ligands. In addition, the analysis indicates an excitation

culated by subtracting the ground-state fit. For each excited-

population of 7% and a zero energy shift. Both of these con-

state structure, the difference between the experimental and

simulated transient spectra can be minimized by introducing

excited-state contribution of approximately 8%, and no en-

fitting parameters such as the energy shift and the photoex-

ergy shift of the excited-state X-ray absorption spectrum is

cited population. This procedure can then be repeated with

expected as the photoexcitation does not affect the charge

density on the Pt atoms.

a contraction along the Pt-Pt axis, allowing the result to con-

It should be emphasized that the present transient EXAFS

verge to the smallest difference between experiment and

analysis goes beyond the simple determination of nearest-

In this way, the best fit was obtained for a Pt-Pt contraction

a more global picture of the excited molecule can be obtained.

Application of this analysis technique to other photocatalytic

Figure 2) [5]. The latter is larger than just resulting from the

systems should provide a wealth of information not directly

Pt-Pt contraction, which indicates that the coordination bonds

available through other methods.

are weakened upon the Pt-Pt bond formation in the excited state. This small Pt-P elongation has been predicted by DFT

calculations [4], but this represents the first experimental

confirmation of such a structural change and illustrates the

sensitivity of both time-resolved XAS as a technique to resolve

Remarkably, the bridging P-O-P ligands do not follow the Pt atoms in the contraction movement, which supports the weakening of the Pt-P bonds and the rigidity of these bidentate