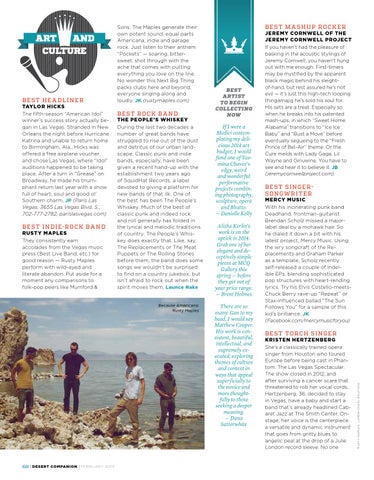 Best rock band The People ’s Whiskey During the last two decades a number of great bands have struggled to rise out of the dust and detritus of our urban landscape. Classic punk and indie bands, especially, have been given a recent hand-up with the establishment two years ago of SquidHat Records, a label devoted to giving a platform for new bands of that ilk. One of the best has been The People’s Whiskey. Much of the best of classic punk and indeed rock and roll generally has folded in the lyrical and melodic traditions of country. The People’s Whiskey does exactly that. Like, say, The Replacements or The Meat Puppets or The Rolling Stones before them, the band does some songs we wouldn’t be surprised to find on a country jukebox, but isn’t afraid to rock out when the spirit moves them. Launce Rake

Best artist to begin collecting now If I were a Medici contemplating my delicious 2014 art budget, I would fund one of Yasmina Chavez’s edgy, weird and wonderful performative projects combining photography, sculpture, opera and Bhutto. — Danielle Kelly Alisha Kerlin’s work is on the uptick in 2014. Grab one of her elegant and deceptively simple pieces at MCQ Gallery this spring — before they get out of your price range. — Brent Holmes There are so many. Gun to my head, I would say Matthew Couper. His work is consistent, beautiful, intellectual, and supremely executed, exploring themes of culture and context in ways that appeal superficially to the novice and more thoughtfully to those seeking a deeper meaning. — Dana Satterwhite

Jeremy Cornwell of the Jeremy Cornwell Project If you haven’t had the pleasure of basking in the acoustic stylings of Jeremy Cornwell, you haven’t hung Leisure, family &amp; Fun out with me enough. First-timers may be mystified by the apparent black magic behind his sleightof-hand, but rest assured he’s not evil — it’s just this high-tech looping thingamajig he’s sold his soul for. His sets are a treat. Especially so when he breaks into his patented mash-ups, in which “Sweet Home Alabama” transitions to “Ice Ice Baby” and “Bust a Move” before eventually segueing to the “Fresh Prince of Bel-Air” theme. Or the Cure melds with Lady Gaga, Lil Wayne and Ginuwine. You have to see and hear it to believe it. JB (jeremycornwellproject.com)

Best singersongw r iter Mercy Music With his incinerating punk band Deadhand, frontman-guitarist Brendan Scholz missed a majorlabel deal by a mohawk hair. So he dialed it down a bit with his latest project, Mercy Music. Using the wry songcraft of the Replacements and Graham Parker as a template, Scholz recently self-released a couple of indelible EPs, blending sophisticated pop structures with heart-rending lyrics. Try his Elvis Costello-meetsChuck Berry rave-up “Repeat” or Stax-influenced ballad “The Sun Follows You” for a sample of this kid’s brilliance. JK (Facebook.com/mercymusicforyou)

Best torch singer Kristen Hertzenberg She’s a classically trained opera singer from Houston who toured Europe before being cast in Phantom: The Las Vegas Spectacular. The show closed in 2012, and after surviving a cancer scare that threatened to rob her vocal cords, Hertzenberg, 36, decided to stay in Vegas, have a baby and start a band that’s already headlined Cabaret Jazz at The Smith Center. Onstage, her voice is the centerpiece, a versatile and dynamic instrument that goes from gritty blues to angelic peal at the drop of a Julie London record sleeve. No one

Sons. The Maples generate their own potent sound, equal parts Americana, indie and garage rock. Just listen to their anthem “Pockets” — soaring, bittersweet, shot through with the ache that comes with putting everything you love on the line. No wonder this Next Big Thing packs clubs here and beyond, everyone singing along and loudly. JK (rustymaples.com)

Your guide to living in southern Nevada.