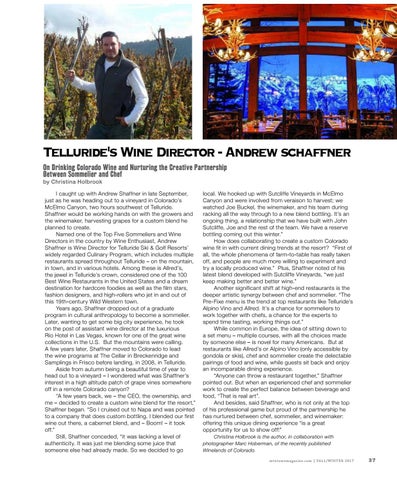 I caught up with Andrew Shaffner in late September, just as he was heading out to a vineyard in Colorado’s McElmo Canyon, two hours southwest of Telluride. Shaffner would be working hands on with the growers and the winemaker, harvesting grapes for a custom blend he planned to create. Named one of the Top Five Sommeliers and Wine Directors in the country by Wine Enthusiast, Andrew Shaffner is Wine Director for Telluride Ski &amp; Golf Resorts’ widely regarded Culinary Program, which includes multiple restaurants spread throughout Telluride – on the mountain, in town, and in various hotels. Among these is Allred’s, the jewel in Telluride’s crown, considered one of the 100 Best Wine Restaurants in the United States and a dream destination for hardcore foodies as well as the film stars, fashion designers, and high-rollers who jet in and out of this 19th-century Wild Western town. Years ago, Shaffner dropped out of a graduate program in cultural anthropology to become a sommelier. Later, wanting to get some big city experience, he took on the post of assistant wine director at the luxurious Rio Hotel in Las Vegas, known for one of the great wine collections in the U.S. But the mountains were calling. A few years later, Shaffner moved to Colorado to lead the wine programs at The Cellar in Breckenridge and Samplings in Frisco before landing, in 2008, in Telluride. Aside from autumn being a beautiful time of year to head out to a vineyard – I wondered what was Shaffner’s interest in a high altitude patch of grape vines somewhere off in a remote Colorado canyon? “A few years back, we – the CEO, the ownership, and me – decided to create a custom wine blend for the resort,” Shaffner began. “So I cruised out to Napa and was pointed to a company that does custom bottling. I blended our first wine out there, a cabernet blend, and – Boom! – it took off.” S till, Shaffner conceded, “it was lacking a level of authenticity. It was just me blending some juice that someone else had already made. So we decided to go

local. We hooked up with Sutcliffe Vineyards in McElmo Canyon and were involved from veraison to harvest; we watched Joe Buckel, the winemaker, and his team during racking all the way through to a new blend bottling. It’s an ongoing thing, a relationship that we have built with John Sutcliffe, Joe and the rest of the team. We have a reserve bottling coming out this winter.” How does collaborating to create a custom Colorado wine fit in with current dining trends at the resort? “First of all, the whole phenomena of farm-to-table has really taken off, and people are much more willing to experiment and try a locally produced wine.” Plus, Shaffner noted of his latest blend developed with Sutcliffe Vineyards, “we just keep making better and better wine.” A nother significant shift at high-end restaurants is the deeper artistic synergy between chef and sommelier. “The Pre-Fixe menu is the trend at top restaurants like Telluride’s Alpino Vino and Allred. It’s a chance for sommeliers to work together with chefs, a chance for the experts to spend time tasting, working things out.” W hile common in Europe, the idea of sitting down to a set menu – multiple courses, with all the choices made by someone else – is novel for many Americans. But at restaurants like Allred’s or Alpino Vino (only accessible by gondola or skis), chef and sommelier create the delectable pairings of food and wine, while guests sit back and enjoy an incomparable dining experience. “Anyone can throw a restaurant together,” Shaffner pointed out. But when an experienced chef and sommelier work to create the perfect balance between beverage and food, “That is real art”. A nd besides, said Shaffner, who is not only at the top of his professional game but proud of the partnership he has nurtured between chef, sommelier, and winemaker: offering this unique dining experience “is a great opportunity for us to show off!” Christina Holbrook is the author, in collaboration with photographer Marc Hoberman, of the recently published Winelands of Colorado. 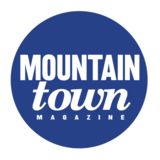