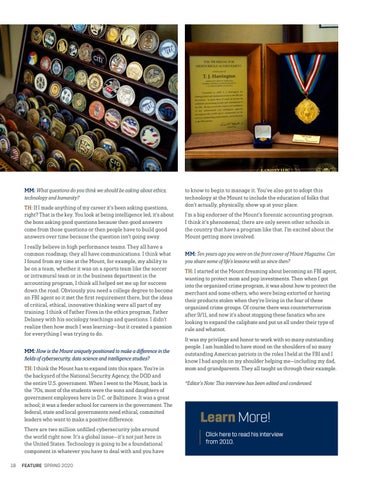 MM: What questions do you think we should be asking about ethics, technology and humanity? TH: If I made anything of my career it’s been asking questions, right? That is the key. You look at being intelligence led, it’s about the boss asking good questions because then good answers come from those questions or then people have to build good answers over time because the question isn’t going away. I really believe in high performance teams. They all have a common roadmap; they all have communications. I think what I found from my time at the Mount, for example, my ability to be on a team, whether it was on a sports team like the soccer or intramural team or in the business department in the accounting program, I think all helped set me up for success down the road. Obviously you need a college degree to become an FBI agent so it met the first requirement there, but the ideas of critical, ethical, innovative thinking were all part of my training. I think of Father Fives in the ethics program, Father Delaney with his sociology teachings and questions. I didn’t realize then how much I was learning—but it created a passion for everything I was trying to do. MM: How is the Mount uniquely positioned to make a difference in the fields of cybersecurity, data science and intelligence studies? TH: I think the Mount has to expand into this space. You’re in the backyard of the National Security Agency, the DOD and the entire U.S. government. When I went to the Mount, back in the ‘70s, most of the students were the sons and daughters of government employees here in D.C. or Baltimore. It was a great school; it was a feeder school for careers in the government. The federal, state and local governments need ethical, committed leaders who want to make a positive difference. There are two million unfilled cybersecurity jobs around the world right now. It’s a global issue—it’s not just here in the United States. Technology is going to be a foundational component in whatever you have to deal with and you have 1 8

to know to begin to manage it. You’ve also got to adopt this technology at the Mount to include the education of folks that don’t actually, physically, show up at your place. I’m a big endorser of the Mount’s forensic accounting program. I think it’s phenomenal; there are only seven other schools in the country that have a program like that. I’m excited about the Mount getting more involved. MM: Ten years ago you were on the front cover of Mount Magazine. Can you share some of life’s lessons with us since then? TH: I started at the Mount dreaming about becoming an FBI agent, wanting to protect mom and pop investments. Then when I got into the organized crime program, it was about how to protect the merchant and some others, who were being extorted or having their products stolen when they’re living in the fear of these organized crime groups. Of course there was counterterrorism after 9/11, and now it’s about stopping these fanatics who are looking to expand the caliphate and put us all under their type of rule and whatnot. It was my privilege and honor to work with so many outstanding people. I am humbled to have stood on the shoulders of so many outstanding American patriots in the roles I held at the FBI and I know I had angels on my shoulder helping me—including my dad, mom and grandparents. They all taught us through their example. *Editor’s Note: This interview has been edited and condensed.

Learn More! Click here to read his interview from 2010. 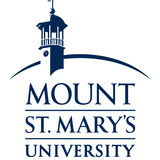