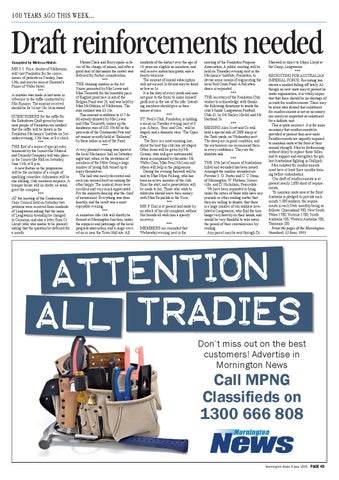 will visit Frankston for the convenience of patients on Sunday, June 13th, and may be seen at Garrood’s Prince of Wales Hotel. *** A mistake was made in last issue in reference to the raffle conducted by Mrs Rimmer. The amount received should be 8s 1d not 18s 1d as stated. *** SUBSCRIBERS for the raffle for the Eiderdown Quilt given by business people of Frankston are notified that the raffle will be drawn in the Frankston Mechanics’ Institute on Saturday evening, 12th June, at 8 o’clock. *** THE first of a series of special entertainments by the Somerville Musical and Comedy Company will take place in the Somerville Hall on Saturday, June 11th, at 8 p.m, A new feature in the programme will be the inclusion of a couple of sparkling comedies. Admission will be one shilling, club members sixpence. A bumper house will no doubt, as usual, greet the company. *** AT the meeting of the Cranbourne Shire Council held on Saturday two petitions were received from residents of Langwarrin asking that the name of Langwarrin township be changed to Carmona, and also a letter from Cr Lloyd (who was unable to be present) asking that the question be deferred for a month.

Messrs Clark and Berry spoke in favor of the change of names, and after a good deal of discussion the matter was deferred for further consideration. *** THE winning number in the Art Union promoted by Mrs Lewis and Miss Trenowth for the beautiful piece of English point lace in aid of the Belgian Fund was 26, and was held by Miss McGibbon, of Melbourne. The sum realised was £3 13s. This amount in addition to £17 6s 6d already donated by Mrs Lewis and Miss Trenowth, makes up the handsome sum of £20 19s 6d’as the proceeds of the Continental Fete and art unions recently held at ‘Balmoral’ by these ladies in aid of the Fund. *** A very pleasant evening was spent at the local Mechanics’ hall on Saturday night last, when, at the invitation of members of the Mitre Camp a large number of young folk turned up to enjoy themselves. The hall was nicely decorated and each one seemed bent on making the other happy. The musical items were excellent and very much appreciated. For the majority dancing was the chief of amusement. Everything was done heartily, and the result was a most enjoyable evening. *** A miniature rifle club will shortly be formed at Mornington Junction, under the auspices and patronage of the local progress association, and a range erected on or near the Town Hall site. All

residents of the district over the age of 16 years are eligible as members, and will receive instruction gratis, also a hearty welcome. The amount of annual subscription will not exceed 2s 6d and may be fixed as low as 1s. It is the duty of every youth and man not gone to the front, to make himself proficient in the use of the rifle. Intending members should give in their names at once. *** ST. Paul’s Club, Frankston, is holding a social on Tuesday evening next at 8 p.m. A farce, ‘Box, and Cox,’ will be staged, and a dramatic item ‘The Open Gate’. The farce is a most amusing one, about the best this club has yet staged. Other items will be given by Mr Cowan, who will give instrumental items accompanied by his sister. Mr Walter Cain, Miss Pearl McLean and others will help in the programme. During the evening farewell will be said to Miss Myra Picking, who has been an active member of the club from the start, and a presentation will be made to her. Those who wish to subscribe should leave their money with Miss Reynolds or the Vicar. *** MR P. Dial is at present laid aside by an attack of his old complaint, asthma. His friends all wish him a speedy recovery. *** MEMBERS are reminded that Wednesday evening next is the

meeting of the Frankston Progress Association. A public meeting will be held on Thursday evening next in the Mechanics’ Institute, Frankston, to devise some means of augmenting the local Red Cross Fund. A full attendance is requested. *** THE secretary of the Frankston Club wishes to acknowledge with thanks the following donations to wards the club’s funds: Langwarrin Football Club £1 1s, Mr Harley 10s 6d, and Mr Hartland 5s. *** MESSRS Alex Scott and Co will hold a special sale of 2000 sheep at the Tanti yards, on Wednesday next. The sheep are in good condition, and the auctioneers can recommend them in every confidence. They are for absolute sale. *** THE 35th list of names of Australians killed and wounded has been issued. Amongst the number wounded are: Privates S. G. Foster and C. C Stone, of Mornington, W. Fletham, Somerville, and D. Nicholson, Pearcedale. We have been requested to bring under the notice of those who have any journals or other reading matter that they are willing to donate, that there is a large number of our soldiers invalided at Langwarrin, who find the time hangs very heavily on their hands, and would be very thankful to wile away the period of their convalescence by reading. Any parcel may be sent through Dr

Maxwell or direct to Major Lloyd at the Camp, Langwarrin. *** RECRUITING FOR AUSTRALIAN IMPERIAL FORCE. Recruiting has shown a marked falling off lately. Although no new units may at present be under organization, it is vitally important that there should be no shortage of recruits for reinforcements. There may be some idea abroad that enlistment for reinforcements is not so necessary nor nearly so important as enlistment for a definite unit. This is quite incorrect. It is far more necessary that reinforcements be provided at present than new units. Reinforcements are urgently required to maintain units at the front at their normal strength. Men be forthcoming without delay to replace those fallen and to support and strengthen the gallant Australians fighting in Gallipoli. Men enlisted for reinforcements must have at least three months training before embarkation. Our draft of reinforcements is at present nearly 2,000 short of requirements, To maintain units now at the front Australia is pledged to provide each month 5,300 soldiers, the requirements in each State monthly being as follows: Queensland 700, New South Wales 1700, Victoria 1700, South Australia 500, Western Australia 500, Tasmania 200. From the pages of the Mornington Standard, 12 June, 1915