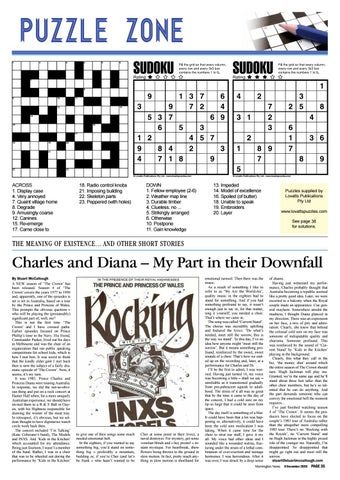 Charles and Diana – My Part in their Downfall By Stuart McCullough A NEW season of ‘The Crown’ has been released. Season 4 of ‘The Crown’ covers the years 1977 to 1990 and, apparently, one of the episodes is set is set in Australia, based on a tour by the Prince and Princess of Wales. This prompts the obvious question – who will be playing the (presumably) significant part of, well, me? This is not the first time ‘The Crown’ and I have crossed paths. Earlier episodes focused on Prince Phillip’s time in the Navy. His friend, Commander Parker, lived out his days in Melbourne and was the chair of an organization that ran public speaking competitions for school kids, which is how I met him. It was weird to think that the kindly elder gent I met back then is now the subject of a fairly dramatic episode of ‘The Crown’. Now, it seems, it’s my turn. It was 1985. Prince Charles and Princess Diana were touring Australia. In response, we did the not-so-obvious thing and put on a rock concert at Hamer Hall when, for a more uniquely Australian experience, we should have invited them to a B & S Ball in Ouyen, with his Highness responsible for drawing the winner of the meat tray. In retrospect, it’s obvious, but we seldom thought to have dignitaries watch circle work back then. The concert included ‘I’m Talking’ (Kate Ceberano’s band), The Models and INXS. And ‘Kids in the Kitchen’ which accounted for my attendance. Being just fourteen, I wasn’t a member of the band. Rather, I was in a choir that was to be wheeled out during the performance by ‘Kids in the Kitchen’

to give one of their songs some much needed emotional heft. In the eighties, if you wanted to say something big, you’d stand on something big – preferably a mountain, building or, if you’re Cher (and let’s be frank – who hasn’t wanted to be

Cher at some point in their lives), a naval destroyer. For mystery, get some venetian blinds and – hey presto! – instant mystique. For heartbreak, show flowers being thrown to the ground in slow motion. In fact, pretty much anything in slow motion is shorthand for

emotional turmoil. Then there was the music. As a result of something I like to refer to as ‘We Are the World-itis’, quality music in the eighties had to stand for something. And if you had something profound to say, it wasn’t enough just to say or, for that matter, sing it yourself; you needed a choir. That’s where we came in. The song was called ‘Current Stand’. The chorus was incredibly uplifting and featured the lyrics: ‘Do what’s needed, meet still the sorrow, this is the way we stand’. To this day, I’ve no idea how anyone might ‘meet still the sorrow’. But it means something profound, reinforced by the sweet, sweet sounds of a choir. That’s how we ended up on the recording and, later, at a performance for Charles and Di. I’ll be the first to admit, I was worried. Having just turned 14, my voice was becoming a little – shall we say – unreliable as it transitioned gradually from pre-pubescent squeak to adulthood. The stress of it all was so great that by the time it came to the day of the concert, I had a cold sore on my lip so large that it could be seen from space. The day itself is something of a blur. It could have been that a lot was happening or, alternatively, it could have been the cold sore medication I was taking. When it came time for the choir to strut our stuff, I gave it my all. My voice had other ideas and I sounded like a wounded walrus, fracturing under the strain of a lethal combination of over-exertion and teenage hormones. I was horrendous. After it was over, I was struck by a deep sense

of shame. Having just witnessed my performance, Charles probably thought that Australia becoming a republic seemed like a pretty good idea. Later, we were escorted to a balcony when the Royal couple made an appearance. Cue general mayhem. Somewhere amidst the madness, I thought Diana glanced in my direction. There was an expression on her face, a mix of pity and admiration. Clearly, she knew that behind the colossal cold sore on my face was someone of indisputable quality and charisma. Someone profound. This was reinforced by the sound of ‘Current Stand’ by ‘Kids in the Kitchen’ playing in the background. Clearly, this what they call in the biz, ‘the money shot’ around which the entire season of The Crown should turn. Hugh Jackman will play me. Granted, we’re the same age and he’ll stand about three feet taller than the other choir members, but he’s so talented that he can do anything. And the part demands someone who can convey the emotional heft the moment requires… I’ve just finished watching season 4 of ‘The Crown’. It seems the producers have elected to focus on the couple’s 1983 tour of Australia rather than the altogether more compelling 1985 tour. There’s no ‘Rocking with the Royals’, no ‘Current Stand’ and no Hugh Jackman in the highly prized role of the younger me. Naturally, I’m disappointed. So disappointed that might go right out and meet still the sorrow. stuart@stuartmccullough.com