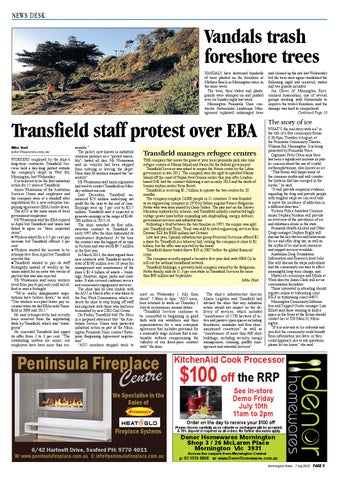 Vandals trash foreshore trees VANDALS have destroyed hundreds of trees planted on the foreshore at Mothers Beach in Mornington twice in the same week. The trees, their stakes and plastic guards were stomped on and pushed over on Sunday night last week. Mornington Peninsula Shire contractor Naturelinks Landscape Management replanted undamaged trees

Transfield staff protest over EBA Mike Hast mike@mpnews.com.au WORKERS employed by the shire’s long-term contractor Transfield Services held a day-long protest outside the company’s depot in Watt Rd, Mornington, last Wednesday. It is believed to be the first industrial action for 15 years at Transfield. James Weissmann of the Australian Services Union said employees and the company were at a standoff after negotiations for a new enterprise bargaining agreement (EBA) broke down. The ASU is the main union of local government employees. Mr Weissmann said the EBA expired in April but Transfield and union had failed to agree on “three important items”: n Workers asked for a 3.5 per cent pay increase but Transfield offered 3 per cent. n Workers wanted the increase to be retrospective from April but Transfield rejected this. n Transfield wanted to pay its staff fortnightly instead of weekly so the union asked for an extra two weeks of pay but this was also rejected. Mr Weissmann said many workers lived from pay to pay and could not afford to wait a fortnight. “We’re really disappointed negotiations have broken down,” he said. “Our workers accepted lower pay increases when we did EBAs with Transfield in 2009 and 2012.” He said retrospectivity had recently been removed from the negotiating table by Transfield, which was “outrageous”. He conceded Transfield had upped its offer from 2 to 3 per cent. “The out­ standing matters are minor; our employees have been more than rea-

sonable.” The picket, now known in industrial relations parlance as a “protest assembly”, lasted all day. Mr Weissmann said no vehicles had been stopped from entering or leaving the depot. More than 30 workers manned the “assembly”. Mr Weissmann said union organisers had tried to contact Transfield on Monday without success. Last December, Transfield announced $73 million underlying net profit for the year to the end of June. Earnings were up 7 per cent to $217 million. Transfield said it expected to generate earnings in the range of $240260 million in 2015-16. The shire awarded its first infrastructure contract to Transfield in early 1997 after the shire disbanded its maintenance department. At the time the contract was the biggest of its type in Victoria and was worth $9.7 million in the first year. In March 2013, the shire signed three new contracts with Transfield worth a total of $190 million over 10 years for management and maintenance of the shire’s $1.4 billion of assets – buildings, furniture, signs, parks and roadsides. It also covered customer service and community engagement services. The shire had its own rumble with the ASU in March after it was taken to the Fair Work Commission, which ordered the shire to stop laying off staff and negotiate with those who had been terminated by new CEO Carl Cowie. On Friday, Transfield told The News in a prepared statement that “the Australian Service Union took protected industrial action as part of the Mornington Peninsula Shire contract Enterprise Bargaining Agreement negotiation”. “ASU members stopped work to

Transfield manages refugee centres THE company that mows the grass at your local peninsula park also runs refugee centres at Manus Island and Nauru for the federal government. Transfield Services was asked to reopen the Nauru centre by the Labor government in late 2012. The company won the right to operated Manus Island off the coast of Papua New Guinea earlier this year after Londonbased G4S lost the contract following a riot in early 2013 and the death of Iranian asylum seeker Reza Berati. Transfield is receiving $1.2 billion to operate the two centres for 20 months. The company employs 24,000 people in 11 countries. It was founded as an engineering company in 1956 by Italian migrant Franco BelgiornoNettis who was soon joined by Carlo Salteri. The pair met on the Snowy Mountain hydroelectric scheme, and Transfield initially constructed highvoltage power lines before expanding into shipbuilding, energy, defence, government services and infrastructure. Following a feud between the two families in 1995, the empire was split into Transfield and Tenix. Tenix was sold to listed engineering services firm Downer EDI for $300 million last October. Late last year, Spanish infrastructure group Ferrovial Servicios offered $2 a share for Transfield in a takeover bid, valuing the company at close to $1 billion, but the offer was rejected by the board. Transfield shares traded above $10 in 2007 before the global financial crisis. The company recently signed a lucrative five-year deal with NBN Co to roll out the national broadband network. Transfield Holdings, a privately held company owned by the BelgiornoNettis family, sold its 11.3 per cent stake in Transfield Services for more than $90 million last September. Mike Hast meet on Wednesday 1 July from about” 7.30am to 4pm. “ASU members returned to work on Thursday 2 July to recommence normal duties. “Transfield Services continues to be committed to bargaining in good faith with our workforce and their representatives for a new enterprise agreement that includes provision for a reasonable wage increase that is sustainable without compromising the viability of our fixed-price contract with” the shire.

The shire’s infrastructure director Alison Leighton said Transfield had advised the shire that any industrial action would not impact on the delivery of services, which included “maintenance of 1730 hectares of active and passive open spaces including foreshores, roadsides and four shiremaintained cemeteries” as well as “maintenance of more than 600 shire buildings, including security, energy management, cleaning, graffiti management and essential services”.

We Specialise in the Sales of

WHAT’S the real story with ice? is the title of a free community forum 6.30-9pm, Tuesday 4 August, at the Peninsula Community Theatre, Wilsons Rd, Mornington. It is being presented by Peninsula Voice. Organiser Peter Orton says there has been a significant increase in public concern about the use of crystal methamphetamine, also known as ice. “This forum will dispel some of the common myths and will counter the hysteria that has emerged in the media,” he said. “It will provide empirical evidence regarding the drug and provide people with tangible steps we can each take to move the incidence of addiction in a different direction.” Victoria Police Assistant Commissioner Stephen Fontana will provide an overview of the prevalence of ice and substance abuse in the state. Peninsula Health Alcohol and Other Drugs manager Stephen Bright will discuss the key drivers and behaviours for ice and other drug use, as well as the myths of Ice and local resources and support services available. Australian Drug Foundation Information and Research head Julie Rae will discuss the steps individuals and the community can take to effect meaningful long-term change, and Master-of-ceremonies and Minds at Work director Jason Clark will act as conversation facilitator. Those interested in attending should register online at trybooking.com/ IGLF or trybooking.com/144955 Mornington Community Information and Support Centre manager Lisa Elliott said those wanting to hold a space in the foyer at the forum should contact her at 320 Main St, Mornington. “If it is relevant to Ice referrals and you feel the community could benefit from information you have, or they could approach you to ask questions, please let me know,” she said.

Order on the day to receive your $

The story of ice

and cleaned up the site last Wednesday but the trees were again vandalised the following night and removed, stakes and tree guards included. Jan Oliver of Mornington Environment Association, one of several groups working with Naturelinks to improve the town’s foreshore, said the damage was hard to comprehend. Continued Page 10

Please choose carefully as no refunds or exchanges will be accepted. A % deposit is required on all orders. No further discounts apply.