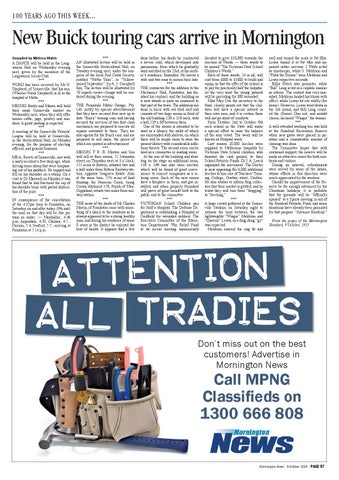 New Buick touring cars arrive in Mornington Compiled by Melissa Walsh A DANCE will be held in the Langwarrin Hall on Wednesday evening next, given by the members of the Langwarrin Social Club. *** WORD has been received by Mr G. Shepherd, of Somerville, that his son, (Wheeler Frank Shepherd) is ill in the hospital at Malta. *** MESSRS Brody and Mason will hold their usual Somerville market on Wednesday next, when they will offer horses cattle, pigs, poultry and sundries. A good yarding is expected. *** A meeting of the Somerville Patriots’ League will be held at Somerville, in the Horticultural Hall, on Monday evening, for the purpose of electing officers, and general business. *** MR A. Rivett, of Somerville, met with a nasty accident a few days ago, while driving some sheep that were trespassing out of his paddock. He tripped and fell on his shoulder on a stump. On a visit to Dr Maxwell on Monday it was found that he had fractured the cap of his shoulder bone with partial dislocation of the joint. *** IN consequence of the cancellation of the 4.37pm train to Frankston, on Saturday, on and after today, (9th inst) the mail on that day will be due per train as under :— Mordialloc, 4.46 p.m; Aspendale, 4.50; Chelsea, 4.5 ; Carrum, 5 4; Seaford, 5.7 ; arriving at Frankston at 5.14 p.m.

*** AN illustrated lecture will be held in the Somerville Horticultural Hall, on Tuesday evening next, under the auspices of the local Red Cross Society, entitled “Wattle Time”, or “Yellowhaired September”, by A. J. Campbell Esq. The lecture will be illustrated by 70 superb views—Songs will be rendered during the evening. *** THE Peninsula Motor Garage, Pty. Ltd. notify by special advertisement that they have secured four new up to date “Buick” touring cars, and having secured the services of two first class mechanics, are prepared to execute all repairs entrusted to them. They are also agents for the Buick cars, and are prepared to sell same, the prices of which are quoted in advertisement. *** MESSRS T R. B. Morton and Son will sell at their rooms, 72 Swanston street, on Thursday next, at 3 o’clock, 155 acres at Bittern, situated two and a half miles from Bittern Railway station, opposite Seagrove Estate. Also at the same time, 55½ acres of land fronting the Narrican Creek, being Crown allotment 178, Parish of Moe, Gippsland, situate two miles from railway station. *** THE news of the death of Mr Charles Martin, of Frankston came with something of a shock to the residents as he always appeared to be a strong healthy man, and during his residence of some 8 years in the district he enjoyed the best of health. It appears that a few

days before his death he contracted a severe cold, which developed into pneumonia, from which he gradually sank and died on the 23rd, at his mother’s residence, Essendon. He leaves a wife and two sons to mourn their loss. *** THE contractor for the addition to the Mechanics’ Hall, Frankston, has finished his contract, and the building as it now stands is quite an ornament to that part of the town. The additions are done in brick with red tiled roof and consists of two large rooms in front of the old building 22ft x 21ft each, with a hall 22ft x 8ft between them. One of the rooms is intended to be used as a library, the walls of which are surrounded with shelves, on which there will be ample room to store the present library with considerable additions thereto. The second room can be used as a committee or reading room. At the rear of the building and abutting on the stage an additional room, 11ft x 14ft has also been erected, which will be found of great convenience to concert companies as a retiring room. Each of the new rooms have a fireplace in them, and gas installed, and when properly furnished will prove of great benefit both to the public and to the committee. *** VICTORIAN School Children pay for Half a Hospital. The Defense Department is establishing a Hospital at Caulfield for wounded soldiers. The Executive Committee of the Education Departments’ War Relief Fund at its recent meeting unanimously

decided to give £10,000 towards the erection of Wards, — these wards to be named “The Victorian State School Children’s Wards.” Each of these wards, 24 in all, will cost from £800 to £1000 to build and equip, so that the offer of the school is to pay for practically half the hospital. At the very least the young patriots will be providing for 300 wounded. Miss May Cox the secretary to the fund, clearly points out that the children will have a special interest in their own men, and it is certain these will not go short of comforts. From October 2nd to October 9th each school in the State will make a special effort to raise the balance of the sum voted. The week will be known as Hospital week. Last season 20,000 leeches were supplied to Melbourne hospitals by Victorian State School children, who donated the cash gained, to their School Patriotic Funds. Dr J. A. Leach organised the movement. The Doctor is now appealing for 6,000 additional leeches to him care of Teachers’ Training College, Grattan street, Carlton. He also wishes to inform frog collectors that their market is glutted, and he trusts they will turn from “frogging” to “leeching,” *** A large crowd gathered at the Somerville Stadium on Saturday night to witness the bout between the two lightweights “Wingie” Meldrum and “Queenie” Lewis, as a ding-dong “go” was expected. Meldrum entered the ring fit and

well and turned the scale at 9st 8lbs. Lewis turned it at 9st 4lbs and appeared rather nervous. J Webb acted as timekeeper, while S. Meldrum and “Pluto the Groom” were Meldrum and Lewis respective seconds. Billie Hutch was promoter, while “Bill” Lang acted in a capable manner as referee. The contest was very onesided; Meldrum landed his blows with effect, while Lewis hit out wildly (for home). However, Lewis went down in the 3rd round, and Bill Lang counted the (Euroa) Don out, and amidst cheers, declared “Wingie” the winner. *** A well-attended working bee was held at the Rosebud Recreation Reserve when new gates were placed in position and a considerable amount of clearing was done. The Committee hopes that with continued support, the reserve will be made an attractive resort for both residents and visitors. During an interval, refreshments were served by some of the ladies, whose efforts in this direction were much appreciated by the workers. Should the improvement of the Reserve be far enough advanced by the Christmas holidays, it is probable that the grounds will be “officially opened” at a Sports meeting in aid of the Rosebud Patriotic Fund, and some donations have already been promised for that purpose. “Advance Rosebud.” From the pages of the Mornington Standard, 9 October, 1915