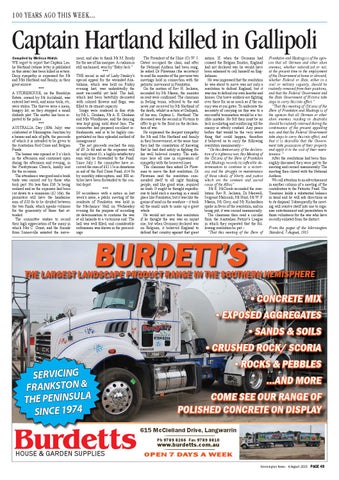 Captain Hartland killed in Gallipoli Compiled by Melissa Walsh WE regret to report that Captain Leslie Hartland (whose letter is published in this issue) has been killed in action. Deep sympathy is expressed for Mr and Mrs Hartland and family, in their great sorrow. *** A STOREHOUSE, on the Brooklyn Estate, owned by Mr Archibald, was entered last week, and some tools, etc, were stolen. The thieves were a mean, hungry lot, as they stripped a small rhubarb plot. The matter has been reported to the police. *** AUSTRALIA Day (30th July) was celebrated at Mornington Junction by a bazaar and sale of gifts, the proceeds of which it is intended to be given to the Australian Red Cross and Belgian Funds. The bazaar was opened at 3 o’clock in the afternoon and continued open during the afternoon and evening, in the Presbyterian Church, kindly lent for the occasion. The attendance was good and a brisk trade was carried out by those who took part. No less than £36 5s being realised and as the expenses had been cut down to a minimum (£2 16s), the promoters will have the handsome sum of £33 6s to be divided between the two funds, which speaks volumes for the generosity of those that attended. The committee wishes to record their high appreciation of the many in which Mrs C. Grant, and the friends from Somerville assisted the move-

ment, and also to thank Mr M. Brody for the use of his marquee. A cushion is still unclaimed, won by “Baby Jack.” *** THE social in aid of Lady Stanley’s special appeal for the wounded Australians, which was held on Friday evening last, was undoubtedly the most successful yet held. The hall, which had been tastefully decorated with colored flowers and flags, was filled to its utmost capacity. Songs were rendered in fine style by Mr L. Denham, Mr A. E. Denham and Mrs Woodhouse, and the dancing was kept going until about 3am. The committee had prepared excellent refreshments, and is to be highly congratulated on their splendid method of management. The net proceeds reached the sum of £9 2s 6d and as the expenses will be only about £1, a highly satisfactory sum will be forwarded to the Fund. Since July 1 the committee have received the sum of £32 15s in donations in aid of the Red Cross Fund; £14 9s by monthly subscription, and 308 articles have been forwarded to the central depot. *** IN accordance with a notice in last week’s issue, a public meeting of the residents of Frankston was held in the Mechanics’ Hall on Wednesday evening for the purpose of recording its determination to continue the war at all hazards to a victorious end. The hall was well filled, and considerable enthusiasm was shown in the proceedings.

The President of the Shire (Cr W. J. Oates) occupied the chair, and after the National Anthem had been sung, he asked Dr Plowman (the secretary) to read the minutes of the previous two meetings held in connection with the patriotic movement in Frankston. On the motion of Rev H. Jackson, seconded by Mr Mason, the minutes as read were confirmed. The chairman in feeling terms, referred to the sad news just received by Mr Hartland of the death, whilst in action at Gallipoli, of his son, Captain L. Hartland. The deceased was the second in Victoria to offer to go to the front on the declaration of war. He expressed the deepest sympathy for Mr and Mrs Hartland and family in their bereavement; at the same time they had the consolation of knowing that he had died nobly in fighting for his well beloved country. The audience here all rose in expression of sympathy with the bereaved ones. The chairman then asked Dr Plowman to move the first resolution. Dr Plowman said the resolution commended itself to all right thinking people, and like good wine, required no bush. It might be thought superfluous to hold such a meeting in a small place like Frankston, but it was like the grains of sand on the seashore – it took all the small units to make up a great whole. He would not move this resolution if he thought the war was an unjust one, but when Germany declared war on Belgium, it behoved England to defend that country against that great

nation. If, when the Germans had crossed the Belgian frontier, England had not declared war he would have been ashamed to call himself an Englishman. He was impressed that the resolution he was about to move was not only a resolution to defend England, but it was one to defend our own hearths and homes. Our brave soldiers are fighting over there for us as much as if the enemy was at our gates. To underrate the necessity of carrying on this war to a successful termination would be a terrible mistake. He felt their must be no lack in enlisting and reinforcing till the enemy is utterly crushed. Any peace before that would be the very worst thing that could happen, therefore it behoved us to carry the following resolution unanimously:– “On this Anniversary of the declaration of a righteous war, this Meeting of the Citizens of the Shire of Frankston and Hastings records its inflexible determination to continue to a victorious end the struggle in maintenance of those ideals of liberty and justice which are the common and sacred cause of the Allies”. Mr E. McComb seconded the resolution. Rev R. Jackson, Dr Maxwell, Sergeant Malcomb, Mr Hunt, Mr W. P. Mason, Mr Grey, and Mr Richardson spoke in favor of the resolution, and on being put, it was carried unanimously. The chairman then read a circular from the Australian Patriot’s League in which they requested that the following resolution be put:– “That this meeting of the Shire of

Frankston and Hastings is of the opinion that all German and other alien enemies, whether naturalized or not, at the present time in the employment of the Government at home or abroard, whether Federal or State, either in a civil or military capacity, should be instantly removed from their positions, and that the Federal Government and the State Government of Victoria take steps to carry this into effect.” “That this meeting of Citizens of the Shire of Frankston and Hastings is of the opinion that all German or other alien enemies residing in Australia should be instantly interned during the continuance of the present appalling war, and that the Federal Government take steps to carry this into effect, and that it is desirable that the Government take possession of their property and apply it to the cost of their maintenance.” After the resolutions had been thoroughly discussed they were put to the meeting and carried unanimously. The meeting then closed with the National Anthem. We call attention to an advertisement in another column of a meeting of the contributors to the Patriotic Fund. The Treasurer holds a substantial balance in hand and he will ask directions as to its disposal. Subsequently the meeting will resolve itself into one to organise entertainment and presentation to those volunteers for the war who have recently enlisted from the district. From the pages of the Mornington Standard, 7 August, 1915

SERVICING FRANKSTON &amp; THE PENINSULA SINCE 1974