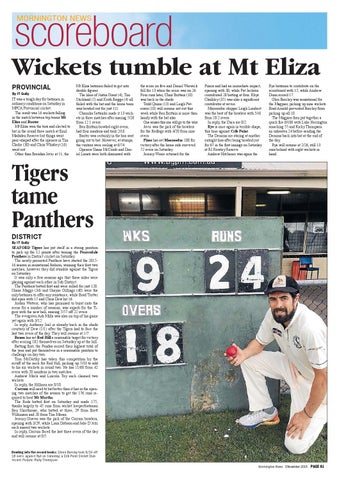 Wickets tumble at Mt Eliza PROVINCIAL By IT Gully IT was a tough day for batsmen in ordinary conditions on Saturday in MPCA Provincial cricket. The result was 16 wickets falling in the match between top teams Mt Eliza and Baxter. Mt Eliza won the toss and elected to bat in the round three match at Emil Madsden Reserve but things went pearâ&#x20AC;&#x201C;shaped after the openers in Tim Clarke (30) and Chris Whisbey (16) went out. Other than Brendan Jovic at 11, the

Mt Eliza batsmen failed to get into double figures. The likes of Justin Grant (4), Tim Stickland (5) and Keith Briggs (4) all failed with the bat and the home team was bowled out for just 111. Chamika Sattambi made it 13 wickets in three matches after snaring 5/26 from 12.1 overs. Ben Brittain bowled eight overs, had four maidens and took 2/16. Baxter was certainly in the box seat going out to bat. However, at stumps, the visitors were reeling at 6/74. Openers Shane McComb and Daniel Lanati were both dismissed with

the score on five and Daniel Warwick fell for 13 when the score was on 26. Four runs later, Chris Brittain (10) was back in the sheds. Todd Quinn (13) and Leigh Paterson (10) will resume not out this week while Ben Brittain is more than handy with the bat also. One senses this one will go to the wire. Jovic was the pick of the bowlers for the Redlegs with 4/20 from nine overs. Pines has set Moorooduc 188 for victory after the home side survived 72 overs on Saturday. Jeremy Weare returned for the

Piners and had an immediate impact, opening with 30, while Pat Jackson contributed 28 batting at four. Rhys Chalkley (35) was also a significant contributor at seven. Moorooduc skipper Leigh Lambert was the best of the bowlers with 5/41 from 18.2 overs. In reply, the Ducs are 0/2. Rye is once again in terrible shape, this time against Crib Point. The Demons are staring at another outright loss after being bowled out for 67 in the first innings on Saturday at RJ Rowley Reserve. Andrew Hitchener was again the

Rye batsman to contribute on the scoreboard with 15, while Andrew Dunn scored 17. Glen Barclay was sensational for the Magpies, picking up nine wickets. Brad Arnold prevented Barclay from picking up all 10. The Magpies then put together a quick fire 6/106 with Luke Herrington smacking 55 and Ricky Thompson an unbeaten 24 before sending the Demons back into bat at the end of the day. Rye will resume at 2/26, still 13 runs behind with eight wickets in hand.

By IT Gully SEAFORD Tigers has put itself in a strong position to pick up the 12 points after taming the Pearcedale Panthers in District cricket on Saturday. The newly promoted Panthers have started the 201516 season in sensational fashion, winning their first two matches, however they did stumble against the Tigers on Saturday. It was only a few seasons ago that these sides were playing against each other in Sub District. The Panthers batted first and were rolled for just 128. Shane Maggs (34) and Shayne Gillings (40) were the only batsmen to offer any resistance, while Brad Trotter did open with 15 and Chris Dew hit 16. Jordan Watters, who has promised to burst onto the scene for a number of seasons, was superb for the Tigers with the new ball, snaring 5/57 off 22 overs. The evergreen Ash Mills was also on top of his game yet again with 3/12. In reply, Anthony Joel is already back in the sheds courtesy of Dew (1/1) after the Tigers had to face the last two overs of the day. They will resume at 1/7. Boneo has set Red Hill a reasonable target for victory after scoring 182 themselves on Saturday up at the hill. Batting first, the Pandas scored their highest total of the year and put themselves in a reasonable position to challenge on day two. Tom McCarthy has taken this competition by the scruff of the neck for Red Hill, picking up 5/33 to add to his six wickets in round two. He has 11/68 from 42 overs with 20 maidens in two matches. Andrew Mock and Lincoln Toy each claimed two wickets. In reply, the Hillmen are 0/10. Carrum will need to bat better than it has in the opening two matches of the season to get the 176 runs required to beat Mt Martha. The Reds batted first on Saturday and made 175, thanks largely to 45 runs from wicket keeper/batsman Ben Shorthouse, who batted at three, 29 from Brett Wilkinson and 20 from Tim Moran. Jeremy Graves was the pick of the Carrum bowlers, opening with 3/29, while Liam Dobson and Jake Dâ&#x20AC;&#x2122;Atri each snared two wickets. In reply, Carrum faced the last three overs of the day and will resume at 0/5.