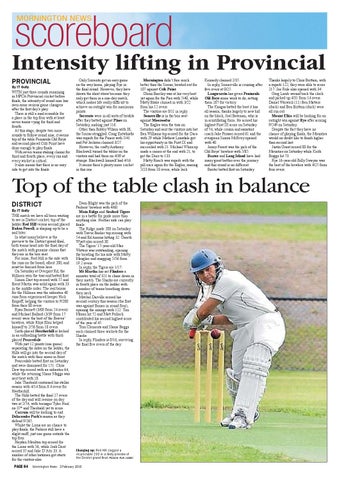 By IT Gully WITH just three rounds remaining in MPCA Provincial cricket before finals, the intensity of round nine has seen some serious game changers after the first day’s play. There is still a mad scramble for a place in the top four with at least seven teams vying for third and fourth. At this stage, despite two more rounds to follow round nine, it seems top of the table Peninsula Old Boys and second-placed Crib Point have done enough to play finals. With seven teams staking claims for third and fourth place, every run and every wicket is critical. It also means that there is no easy ride to get into the finals.

Only Sorrento get an easy game on the way home, playing Rye in the final round. However, they have drawn the short straw because they only get them in a one-day match, which makes life really difficult to achieve an outright win for maximum points. Sorrento were in all sorts of trouble after they batted against Pines on Saturday, making just 116. Other than Bobby Wilson with 38, the Sorras struggled. Craig Entwhistle was superb for the Piners with 5/41 and Pat Jackson claimed 3/27. However, the crafty Anthony Blackwell turned the tables on the visitors and had them on 4/39 at stumps. Blackwell himself had 4/16. It seems there’s plenty more cricket in this one.

Mornington didn’t fare much better than the Sorras, bowled out for 107 against Crib Point. Glenn Barclay was at his very best yet again for the Pies with 5/40, while Matty Blake chimed in with 3/22 from his 12 overs. The visitors are 0/11 in reply. Somerville is in the box seat against Moorooduc. The Eagles won the toss on Saturday and sent the visitors into bat. Ben Williams top scored for the Ducs with 29 while Mathew Lonsdale got his opportunity in the First IX and succeeded with 21. Michael Whincup made a cameo at the end with 21, to get the Ducs to 133. Matty Roach was superb with the pill once again for the Eagles, snaring 5/23 from 18 overs, while Jack

Kennedy claimed 2/35. In reply, Somerville is cruising after five overs at 0/25. Langwarrin has given Peninsula Old Boys some work to do, setting them 267 for victory. The Kangas batted the best it has all season, thanks largely to new kid on the block, Joel Bateman, who is in scintillating form. He scored his highest First IX score on Saturday of 74, while cousin and assistant coach Jake Prosser scored 61 and the evergreen Simon McEvoy opened with 40. Jonny Forest was the pick of the Old Boys’ bowlers with 5/85. Baxter and Long Island have had many great battles over the journey and this round is no different. Baxter batted first on Saturday.

Thanks largely to Chris Brittain, with a superb 122, they were able to score 217. Joe Rule also opened with 34. Greg Lamb wound back the clock and picked up 4/31 from 14 overs. Daniel Warwick (11) Ben Matters (duck) and Ben Brittain (duck) were all run out. Mount Eliza will be looking for an outright win against Rye after scoring 9/249 on Saturday. Despite the fact they have no chance of playing finals, the Mounties would no doubt like to finish higher than second last. Justin Grant scored 88 for the Mounties on Saturday while Keith Briggs hit 73. Rye 16-year-old Billy Swayne was the best of the bowlers with 4/25 from four overs.

Top of the table clash in balance DISTRICT By IT Gully THE match we have all been waiting to see in District cricket, top of the ladder Red Hill versus second placed Baden Powell, is shaping-up to be a nail biter. In what many believe is the preview to the District grand final, both teams head into the final day of the match with genuine claims that they are in the box seat. For mine, Red Hill is the side with the runs on the board, albeit 200, and must be fancied from here. On Saturday at Overport Rd, the Hillmen won the toss and batted first. Simon Dart top scored with 55 and Brent Martin was solid again with 33 in the middle order. The real bonus for the Hillmen was the unbeaten 40 runs from experienced keeper Nick Esipoff, helping the visitors to 9/200 from their 80 overs. Ryan Barnett (3/60 from 24 overs) and Michael Ballard (3/39 from 17 overs) were the best of the Braves’ bowlers, while Rhys Elmi helped himself to 2/56 from 18 overs. Sixth-placed Heatherhill is locked in an enthralling battle with thirdplaced Pearcedale. With just 12 points (one game) separating the sides on the ladder, the Hills will go into the second day of the match with their noses in front. Pearcedale batted first on Saturday and were dismissed for 151. Chris Dew top scored with an unbeaten 64, while the returning Shane Maggs was next best with 18. Jake Theobald continued his stellar season with 4/14 from 8.4 overs for Heatherhill. The Hills batted the final 27 overs of the day and will resume on day two at 2/74, with teenager Tyler Neal on 37* and Theobald yet to score. Carrum will be looking to end Delacombe Park’s season as they defend 9/265. Whilst the Lions are no chance to play finals, the Parkers still have a slight sniff, just one game outside the top four. Hayden Moulton top scored for the Lions with 56, while Josh Dent scored 35 and Jake D’Atri 33. A number of other batsmen got starts for the visitors also.

Dean Blight was the pick of the Parkers’ bowlers with 4/60. Main Ridge and Seaford Tigers are in a battle for pride more than anything else. Neither side can play finals. The Ridge made 208 on Saturday with Travis Barker top scoring with 54 and Ed Aarons hitting 32. Gareth Wyatt also scored 30. The Tigers’ 17-year-old Max Watters was outstanding, opening the bowling for his side with Matty Meagher and snagging 5/56 from 19.2 overs. In reply, the Tigers are 1/17. Mt Martha has set Flinders a monster total of 321 to chase down in their match. The Sharks are currently in fourth place on the ladder with a number of teams breathing down their neck. Mitchel Darville scored his second century this season (the first was against Boneo in round four), opening the innings with 122. Tim Moran hit 52 and Matt Pollock contributed his second highest score of the year of 45. Tom Clements and Shane Beggs each claimed three wickets for the Sharks. In reply, Flinders is 0/16, surviving the final five overs of the day.

Charging up: Red Hill slogged a respectable 200 in a likely preview of the District grand final. Picture: Rab Siddhi