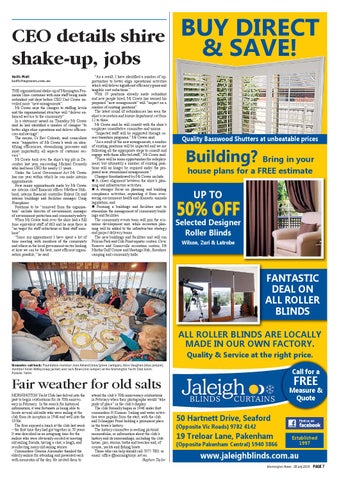 CEO details shire shake-up, jobs Keith Platt keith@mpnews.com.au THE organisational shake-up of Mornington Peninsula Shire continues with nine staff being made redundant just days before CEO Carl Cowie unveiled more “new arrangements”. Mr Cowie says the changes to staffing levels and the organisational structure will “deliver enhanced service to the community”. In a statement issued on Thursday Mr Cowie said he had identified a number of changes “to better align shire operations and deliver efficiencies and savings”. The mayor, Cr Bev Colomb, said councillors were “supportive of Mr Cowie’s work on identifying efficiencies, streamlining processes and most importantly, all aspects of customer service”. Mr Cowie took over the shire’s top job in December last year, succeeding Michael Kennedy who had been CEO for nearly 15 years. Under the Local Government Act Mr Cowie has one year within which he can make interim appointments. New senior appointments made by Mr Cowie are interim chief financial officer Matthew Hubbard, interim financial controller Bulent Oz and interim buildings and facilities manager Craig Humphries. Positions to be “removed from the organisation” include director of environment, manager of environment protection and community safety. When Mr Cowie took over the shire had a full time equivalent staff of 663 and he says there is “no target for staff reductions or final staff numbers”. “Since my appointment I have spent a lot of time meeting with members of the community and others in the local government sector looking at how we can be the best, most efficient organisation possible,” he said.

“As a result, I have identified a number of opportunities to better align operational activities which will deliver significant efficiency gains and tangible cost reductions.” With 19 positions already made redundant and new people hired, Mr Cowie has warned his proposed “new arrangements” will “impact on a number of existing positions”. The latest round of redundancies has seen the shire’s recreation and leisure department cut from 12 to three. Mr Cowie said he will consult with the shire’s employee consultative committee and unions. “Impacted staff will be supported through career transition programs,” Mr Cowie said. “As a result of the new arrangements, a number of existing positions will be impacted and we are following all the appropriate steps to consult and engage with those affected staff,” Mr Cowie said. “There will be some opportunities for redeployment, but ultimately a number of existing positions will no longer be required under the proposed new, streamlined arrangements.” Changes foreshadowed by Mr Cowie include:  A closer alignment between the shire’s planning and infrastructure activities;  A stronger focus on planning and building compliance activities, separating it from overseeing environment health and domestic animals legislation; and  Forming a buildings and facilities unit to streamline the management of community buildings and facilities. The community events team will join the economic development unit, while recreation planning will be added to the infrastructure strategy and project delivery teams. The new buildings and facilities unit will run Pelican Park and Crib Point aquatic centres, Civic Reserve and Somerville recreation centres, Mt Martha Golf Course and Hastings Hub; foreshore camping and community halls.

Fair weather for old salts MORNINGTON Yacht Club has delved into the past to begin celebrations for its 70th anniversary in February. In the search for historical information, it was fortunate in being able to locate several old salts who were sailing at the club from its inception in 1946 and well into the 1950s. The four enjoyed a lunch at the club last week – the first time they had got together in 50 years. It was described as an intriguing time for the sailors who were obviously excited at meeting old sailing friends, having a chat, a laugh, and recollecting many old sailing stories. Commodore Graeme Alexander thanked the elderly sailors for attending and presented each with mementos of the day. He invited them to

attend the club’s 70th anniversary celebrations in February when their photographs would “take pride of place” in the club’s display. The club formally began in 1946 under first commodore H Kinnear. Sailing and water activities were popular from the start, with the club and Schnapper Point holding a prominent place in the town’s history. The history committee is seeking pictorial memorabilia, or information about the club’s history and its surroundings, including the club house, pier, storms, baths and beaches and, of course, yachts and fishing boats. Those who can help should call 5975 7001 or email: office @morningtonyc.net.au Stephen Taylor