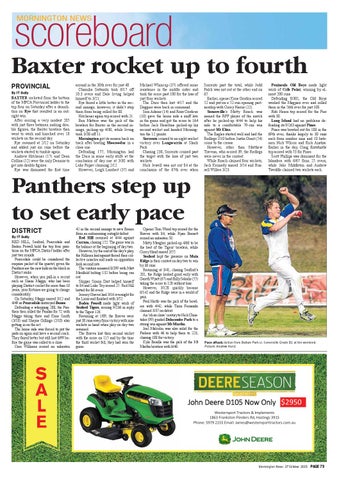 Baxter rocket up to fourth PROVINCIAL By IT Gully BAXTER rocketed from the bottom of the MPCA Provincial ladder to the top four on Saturday after a demolition on Rye that resulted in an outright win. After scoring a very modest 205 with just three batsmen making double figures, the Baxter bowlers then went to work and knocked over 18 wickets on the second day. Rye resumed at 2/12 on Saturday and added just six runs before the wickets started to tumble again. Andrew Hitchener (17) and Dean Collins (12) were the only Demons to get into double figures. Rye was dismissed the first time

around in the 30th over for just 48. Chamika Sattambi took 6/17 off 10.3 overs and Dale Irving helped himself to 3/21. Rye faired a little better in the second innings, however, it didn’t stop them from being rolled for 88. Hitchener again top scored with 21. Ben Matters was the pick of the bowlers for Baxter in the second innings, picking-up 4/30, while Irving took 3/38 off 11. Mornington got its season back on track after beating Moorooduc in a close one. Defending 177, Mornington had the Ducs in some early strife at the conclusion of day one at 3/30 with Luke Popov claiming 2/12. However, Leigh Lambert (37) and

Michael Whincup (37) offered some resistance in the middle order and took the score past 100 for the loss of just four wickets. The Ducs then lost 4/17 and the Doggies were back in command. Sam Adams (14) and Ross Cordeux (10) gave the home side a sniff late in the game and got the score to 164 before Jack Heseltine picked-up his second wicket and handed Mornington the 12 points. Sorrento cruised to an eight-wicket victory over Langwarrin at Shark Park. Chasing 238, Sorrento cruised past the target with the loss of just two wickets. Nick Jewell was not out 84 at the conclusion of the 67th over when

Sorrento past the total, while Jedd Falck was not out at the other end on 65. Earlier, opener Kane Gordon scored 52 and put-on a 52-run opening partnership with Corey Harris (22). Somerville’s Matty Roach was named the RPP player of the match after he picked-up 4/44 to help his side to a comfortable 79-run win against Mt Eliza. The Eagles started well and had the Redlegs 2/10 before Justin Grant (54) come to the crease. However, other than Matthew Travena, who scored 39, the Redlegs were never in the contest. While Roach claimed four wickets, Jack Kennedy snared 3/54 and Russell Wilkes 3/23.

Peninsula Old Boys made light work of Crib Point, winning by almost 200 runs. Defending 8/301, the Old Boys worked the Magpies over and rolled them in the 56th over for just 108. Rob Hearn top scored for the Pies with 30. Long Island had no problems defending its 9/263 against Pines. Pines was bowled out for 188 in the 69th over, thanks largely to 30 runs each from number nine and 10 batsmen Nick Wilcox and Rick Anstiss. Earlier in the day, Craig Entwhistle top scored with 73 for Pines. Scott Phillips was dominant for the Islanders with 6/67 from 25 overs, while Jake Middleton and Andrew Tweddle claimed two wickets each.

Panthers step up to set early pace DISTRICT By IT Gully RED HILL, Seaford, Pearcedale and Baden Powell hold the top four positions on the MPCA District ladder after just two rounds. Pearcedale could be considered the surprise packet of the quartet, given the Panthers are the new kids on the block in District ranks. However, when you pull-in a recruit such as Shane Maggs, who has been playing District cricket for more than 10 years, your fortunes are going to change considerably. On Saturday, Maggs snared 3/12 and 4/49 as Pearcedale destroyed Boneo. Defending a whopping 288, the Panthers then rolled the Pandas for 72 with Maggs taking three and Kane Smith (3/18) and Shayne Gillings (2/10) also getting in on the act. The home side was forced to put the pads on again and have a second crack. They faired better but still lost 6/99 before the game was called to a close. Cam Williams scored an unbeaten

42 in the second innings to save Boneo from an embaressing outright defeat. Red Hill resumed at 4/44 against Carrum, chasing 152. The game was in the balance at the beginning of day two. However, by the end of the day’s play, the Hillmen had against flexed their collective muscles and made an opposition look second rate. The visitors amassed 8/299 with Matt Merifield belting 132 before being run out. Skipper Simon Dart helped himself to 84 and Luke Toy scored 25. Red Hill batted for 86 overs. Jeremy Graves had 3/16 overnight for the Lions and finished with 3/52. Baden Powell made light work of Seaford Tigers, scoring 9/236 in reply to the Tigers 126. Resuming at 1/89, the Braves were just 38 runs away from victory with nine wickets in hand when play on day two resumed. The Braves lost their second wicket with the score on 115 and by the time the third wicket fell, they had won the game.

Opener Tom Wood top scored for the Braves with 84, while Ryan Barnett scored an unbeaten 50. Matty Meagher picked-up 4/66 to be the best of the Tigers’ bowlers, while Corey Hand snared 3/55. Seaford kept the pressure on Main Ridge in their contest on day two to win by 36 runs. Resuming at 3/41, chasing Seaford’s 201, the Ridge looked good early with Gareth Wyatt (67) and Billy Sakalis (55) taking the score to 128 without loss. However, 3/128 quickly became 6/142 and the Ridge were in a world of pain. Paul Hartle was the pick of the bowlers with 4/42, while Tiron Fernando claimed 3/37 on debut. An ‘oh so close’ century to Nick Christides (99) guided Delacombe Park to a strong win against Mt Martha. Joel Malcolm was also solid for the Parkers with 46 to help them to 223, chasing 188 for victory. Kyle Bendle was the pick of the Mt Martha bowlers with 6/46.

Pace attack: Action from Ballam Park vs Somerville Grade B1 at the weekend. Picture: Andrew Hurst