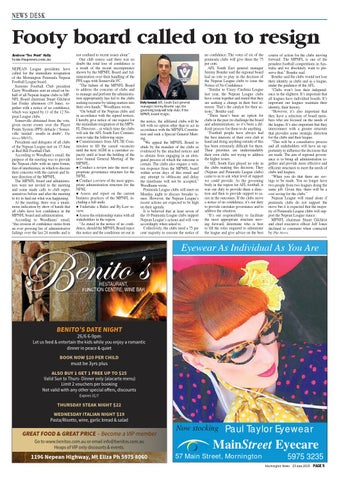 Footy board called on to resign Andrew ‘Toe Punt’ Kelly team@mpnews.com.au NEPEAN League presidents have called for the immediate resignation of the Mornington Peninsula Nepean Football League board. Sorrento Football Club president Garry Woodhams sent an email on behalf of all Nepean league clubs to MPNFL Board chairman Stuart Gilchrist last Friday afternoon (19 June), together with a notice of no confidence, which was signed by 11 of the 12 Nepean League clubs. Somerville abstained from the vote, given recent events over the Player Points System (PPS) debacle (‘Somerville ‘misled’, results in doubt’, The News 9/6/15). Presidents and delegates of all clubs of the Nepean League met on 15 June at Red Hill Football Club. According to Woodham’s email, the purpose of the meeting was to provide the Nepean clubs with an open forum, free of interference, in which to discuss their concerns with the current and future direction of the MPNFL. The MPNFL board and administrators were not invited to the meeting and some made calls to club representatives before and after the meeting to try to find out what was happening. At the meeting, there was a unanimous indication by show of hands that all clubs have lost confidence in the MPNFL board and administration. According to Woodhams’ email, “this erosion of confidence stems from an ever growing list of administrative failings over the last 24 months and is

not confined to recent issues alone”. One club source said there was no doubt the total loss of confidence is a result of the recent incompetence shown by the MPNFL Board and Administration over their handling of the PPS saga with Somerville FC. “The failure of the MPNFL Board to address the concerns of clubs and to manage and perform the administration appropriately has led to the clubs seeking recourse by taking matters into their own hands,” Woodhams wrote. “On behalf of the Nepean clubs and in accordance with the signed notices, I hereby give notice of our request for the immediate resignation of the MPNFL Directors – at which time the clubs will ask the AFL South East Commission to take the following steps:  Commissioners from AFL SE Commission to fill the casual vacancies until the next AGM in a caretaker capacity until at least the holding of the next Annual General Meeting of the MPNFL.  Conduct a review into the most appropriate governance structure for the NFNL.  Conduct a review of the most appropriate administration structure for the NFNL  Assess and report on the current business practices of the MPNFL including a full audit.  Undertake a Rules and By-Law review.  Assess the relationship status with all stakeholders in the region. “As stated in the notice of no confidence, should the MPNFL Board reject this notice and the conditions set out in

the notice, the affiliated clubs will be left with no option other than to act in accordance with the MPNFL Constitution and seek a Special General Meeting. “We appeal the MPNFL Board to abide by the mandate of the clubs as evidenced by the attached notices and to abstain from engaging in an elongated process of which the outcome is certain. The clubs also require a written response from the MPNFL board within seven days of this email and any attempt to obfuscate and delay the timeframe will not be accepted,” Woodhams wrote. Peninsula League clubs will meet on Monday night to discuss broader issues. However, the Nepean League’s recent actions are expected to be high on their agenda. It is believed that at least seven of the 10 Peninsula League clubs support Nepean League’s actions and will vote accordingly when asked to. Collectively, the clubs need a 75 per cent majority to execute the notice of

no confidence. The votes of six of the peninsula clubs will give them the 75 per cent. AFL South East general manager Jeremy Bourke said the regional board had no role to play in the decision of the Nepean League clubs to issue the Notice of No Confidence. “Similar to Casey Cardinia League last year, the Nepean League clubs have come together and stated that they are seeking a change in their best interests. That’s the catalyst for their actions,” Bourke said. “There hasn’t been an option for clubs in the past (to challenge the board and administration), so it’s been a difficult process for them to do anything. “Football people have always had the best interests of their own club at hand and doing anything outside of this has been extremely difficult for them. Their priorities are understandably their own clubs, not trying to address the higher issues. “AFL South East played no role in the clubs making this decision. They (Nepean and Peninsula League clubs) came to us to ask what level of support we could provide. As the governing body in the region for AFL football, it was our duty to provide them a direction and then to provide support to assist in the outcomes. If the clubs move a notice of no confidence, it’s our duty to provide caretaker governance and to address the situation. “It’s our responsibility to facilitate the most appropriate structure moving forward, determine who is best to fill the roles required to administer the league and give advice on the best

course of action for the clubs moving forward. The MPNFL is one of the proudest football competitions in Australia and we absolutely want to preserve that,” Bourke said. Bourke said the clubs would not lose their identity as clubs and as a league, under the guidance of the AFL. “Clubs won’t lose their independence in the slightest. It’s important that all leagues have individual boards. It’s important our leagues maintain their identity, their history. “However, it’s also important that they have a selection of board members who are focused on the needs of the league. It’s also important that they interconnect with a greater structure that provides some strategic direction for the clubs and their league. “This will be a consultative process and all stakeholders will have an opportunity to influence the decisions that are made. The aim of regional governance is to bring all administration together and provide more effective and efficient structures to meet the needs of clubs and leagues. “When you do that there are savings to be made. You no longer have two people from two leagues doing the same job. Given this, there will be a cost saving for the clubs.” Nepean League will stand alone if peninsula clubs do not support the move but it is expected that the majority of Peninsula League clubs will support the Nepean League stance. MPNFL chairman Stuart Gilchrist and chief executive officer Jeff Jones declined to comment when contacted by The News.

BOOK NOW $20 PER CHILD must be 3yrs plus ALSO BUY 1 GET 1 FREE UP TO $25 Valid Sun to Thurs- Dinner only (alacarte menu) Limit 2 vouchers per booking Not valid with any other special offers, discounts Expires 31/7