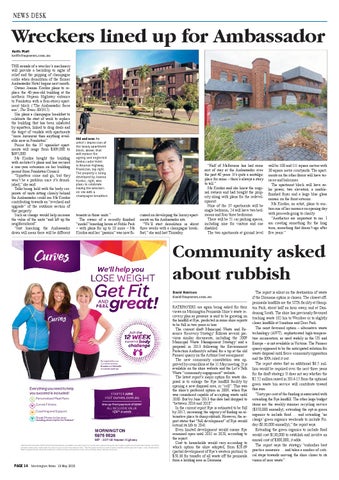 Wreckers lined up for Ambassador Keith Platt keith@mpnews.com.au THE sounds of a wrecker’s machinery will provide a backdrop to sighs of relief and the popping of champagne corks when demolition of the former Ambassador Hotel begins next month. Owner Joanna Kordos plans to replace the 40-year-old building at the northern Nepean Highway entrance to Frankston with a four-storey apartment block (‘The Ambassador faces axe’, The Times 30/3/15). She plans a champagne breakfast to celebrate the start of work to replace the building that has been inhabited by squatters, linked to drug deals and the target of vandals with apartments “more luxurious than anything available now in Frankston”. Prices for the 37 upmarket apartments will range from $309,000 to $695,000. Ms Kordos bought the building with architect’s plans and has secured a one-year extension on her building permit from Frankston Council. “Squatters come and go, but they won’t be a problem once it’s demolished,” she said. Talks being held with the body corporate of units sitting closely behind the Ambassador could see Ms Kordos contributing towards an “overhaul and upgrade” of the outdoors section of that property. Such as change would help increase the value of the units “and lift up the neighbourhood”. “Just knocking the Ambassador down will mean there will be different

Old and new: An artist’s impression of the luxury apartment block, above, that will replace the ageing and neglected Ambassador Hotel in Nepean Highway, Frankston, top right. The property is being developed by Joanna Kordos, right, who plans to celebrate having the wreckers on site with a champagne breakfast.

tenants in those units.” The owner of a recently finished “model” boarding house at Noble Park – with plans for up to 10 more – Ms Kordos said her “passion” was now fo-

cussed on developing the luxury apartments on the Ambassador site. “We’ll start demolition in about three weeks with a champagne breakfast,” she said last Thursday.

Be inspired by our Curvette winners Brooke and Michelle at curves.com.au

visit curves.com.au One up-front payment of $299*

Great Prizes to be won

including return trip for 2 to Thailand^

MORNINGTON 5975 5526 MIP - 33/1140 Nepean Highway *$299 12 week offer valid between 01/05/15 and 31/05/15 at participating clubs only. Available to new members only, 18+yrs of age. Not valid in conjunction with any other offer. Package to be paid for up front in full. Includes meal plans, Curves Fitness and weekly coaching sessions. Conditions apply. Ask in Club or see curves.com.au/12-week-challenge for detail. ^Major Prize includes return trip for 2 people to Thailand. Competition conditions apply. Ends 31 August. © Curves. All rights reserved. Weight loss programs take time and personal commitment to be effective and require professional advice on diet, exercise and lifestyle changes. Individual results may vary.

will be 108 and 111 square metres with 30 square metre courtyards. The apartments on the other floors will have terraces and balconies. The apartment block will have solar power, two elevators, a marblefinished foyer and a large blue glass mosaic on the front exterior. Ms Kordos, an artist, plans to auction one of her mosaics on opening day with proceeds going to charity. “Aesthetics are important to me. I am creating something for the long term, something that doesn’t age after five years.”

Everything you need to help you succeed is included!

“Half of Melbourne has had some sort of stay at the Ambassador over the past 40 years. It’s quite a nostalgic place for some – there’s always a story to tell.” Ms Kordos said she knew the original owners and had bought the property along with plans for the redevelopment. Nine of the 37 apartments will be single bedroom, 24 will have two bedrooms and four three bedrooms. There will be 51 car parking spaces, including nine for visitors and one disabled. The two apartments at ground level

RATEPAYERS are again being asked for their views on Mornington Peninsula Shire’s waste recovery plan as pressure is said to be growing on the landfill at Rye, predicted in some shire reports to be full in two years or less. The current draft ̔Municipal Waste and Resource Recovery Strategy’ follows several previous similar documents, including the 2009 ̔Municipal Waste Management Strategy’ and a proposal in 2013 following the Environment Protection Authority's refusal for a tip at the old Pioneer quarry on the Arthurs Seat escarpment. The new community consultation was approved by councillors at the 11 May meeting. It is available on the shire website and the Let’s Talk Waste “community engagement” website. The latest report’s major option for waste disposal is to enlarge the Rye landfill facility by opening a new disposal area, or “cell”. This was the shire’s preferred option in 2009, when Rye was considered capable of accepting waste until 2030. But by June 2013 this date had dropped to “between 2016 and 2018”. In the current report Rye is estimated to be full by 2017, increasing the urgency of finding an alternative place to dump rubbish. However, the report states that “full development” of Rye would extend its life to 2041. Even limited development would ensure Rye remained open until 2032 or 2028, according to the report. Cost to households would vary according to which option the shire adopted, from $28.69 (partial development of Rye’s western portion) to $58.36 for transfer of all waste off the peninsula from a holding area in Dromana.

The report is silent on the destination of waste if the Dromana option is chosen. The closest offpeninsula landfills are the SITA facility at Hampton Park, about half an hour away, and at Dandenong South. The shire has previously favoured trucking waste 102 km to Werribee or to slightly closer landfills at Sunshine and Deer Park. The most favoured option – alternative waste technology (AWT), sophisticated high-temperature incinerators, as used widely in the US and Europe – is not available in Victoria. The Pioneer quarry appeared to be the anticipated solution for waste disposal until fierce community opposition and the EPA ruled it out. The report states that an additional $6.5 million would be required over the next three years for the draft strategy. It does not say whether the $2.52 million raised in 2014-15 from the optional green waste bin service will contribute toward this sum. “Sixty per cent of the funding is associated with extending the Rye landfill. The other large budget items are the weekly summer recycling service ($350,000 annually), extending the opt-in green organics to include food … and extending ‘no charge’ green organics weekends to include Friday ($130,000 annually),” the report says. Extending the green organics to include food would cost $130,000 to establish and involve an annual cost of $300,000, it adds. The report says the strategy “embodies best practice measures … and takes a number of critical steps towards moving the shire closer to its vision of zero waste”.