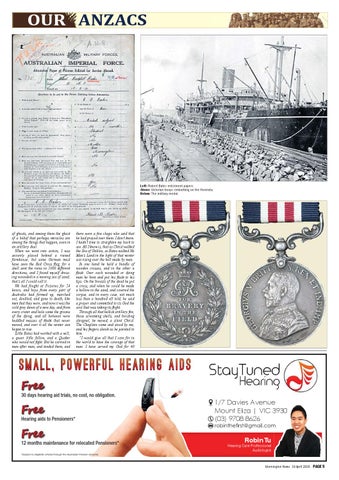 Left: Robert Bates enlistment papers. Above: Victorian troops embarking on the Hororata. Below: The military medal.

of ghosts, and among them the ghost of a belief that perhaps miracles are among the things that happen, even in an artillery duel. When we went into action, I was securely placed behind a ruined farmhouse; but some German must have seen the Red Cross flag, for a shell sent the ruins in 5000 different directions, and I found myself dressing wounded in a moving sea of sand; that’s all I could call it. We had fought at Pozieres for 24 hours, and boys from every part of Australia had formed up, marched out, doubled, and gone to death, like men that they were; and now it was the cold grey dawn of a new day, and from every crater and hole came the groans of the dying, and all between were huddled masses of khaki that never moved, and over it all the winter sun began to rise. Little Bates had worked with a will; a queer little fellow, and a Quaker who would not fight. But he carried in man after man, and tended them, and

there were a few chaps who said that he had prayed over them. I don’t know. I hadn’t time to straighten my back to see. All I know is, that as Christ walked the Sea of Galilee, so Bates walked No Man’s Land in the light of that winter sun rising over the hell made by man. In one hand he held a bundle of wooden crosses, and in the other a flask. Over each wounded or dying man he bent and put his flask to his lips. On the breasts of the dead he put a cross, and when he could he made a hollow in the sand, and covered the corpse, and in every case, not much less than a hundred all told, he said a prayer and committed to its God the soul that was taking its flight. Through all that hellish artillery fire, those screaming shells, and bursting shrapnel, he moved, a silent Christ. The Chaplain came and stood by me, and his fingers shook as he pointed to him. “I would give all that I care for in the world to have the courage of that man. I have served my God for 40

*Subject to eligibility criteria through the Australian Pension Scheme.