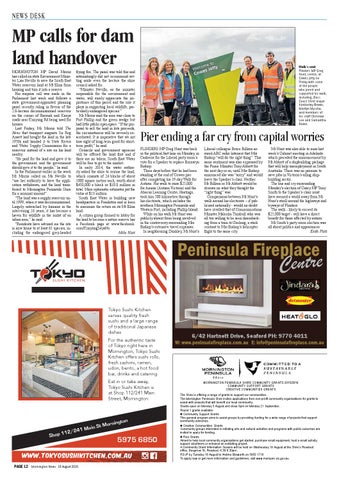 MP calls for dam land handover MORNINGTON MP David Morris has called on state Environment Minister Lisa Neville to save the South East Water reservoir land at Mt Eliza from housing and turn it into a reserve. His surprise call was made in the Parliament last week and follows a state government-appointed planning panel recently ruling in favour of the 2.8-hectare decommissioned reservoir on the corner of Barmah and Kanya roads near Kunyung Rd being used for houses. Last Friday, Mr Morris told The News that transport magnate Sir Reg Ansett had bought the land in the late 1950s and handed it to State Rivers and Water Supply Commission for a reservoir instead of a site on his land nearby. “He paid for the land and gave it to the government, and the government should give it to the people,” he said. In the Parliament earlier in the week Mr Morris called on Ms Neville to “use her authority to have the application withdrawn, and the land transferred to Mornington Peninsula Shire for a nominal amount”. “The land was a supply reservoir until 1999, when it was decommissioned. Largely untouched by humans in the intervening 16 years, it has become a haven for wildlife in the midst of an urban area,” he said. “Residents have advised me the site is now home to at least 61 species, including the endangered grey-headed

flying fox. The panel was told this and astonishingly did not recommend setting aside even the hectare the shire council asked for. “Minister Neville, as the minister responsible for the environment and water, will surely appreciate the importance of this parcel and the role it plays in supporting local wildlife, particularly endangered species.” Mr Morris said the area was close to Port Phillip and the green wedge but had little public open space. “If the proposal to sell the land in lots proceeds, the circumstances will be severely exacerbated. It is imperative that we not lose sight of long-term good for shortterm profit,” he said. Councils and government agencies will be offered the land first and if there are no takers, South East Water will be free to go to the market. In early 2014, the water authority asked the shire to rezone the land, which consists of 24 blocks of about 1000 square metres each, worth about $450,000 a block or $10.8 million in total. More optimistic estimates put the value at $13 million. South East Water is building new headquarters in Frankston and is keen to maximise the return on its Mt Eliza land. A citizen group formed to lobby for the land to become a nature reserve has a Facebook page at www.facebook. com/KunyungSaysNo Mike Hast

Walk’s end: Flinders MP Greg Hunt, centre, at Cowes jetty on Friday with some of the people who joned and supported his walk, including, Bass Coast Shire mayor Kimberley Brown, Marilyn Myszka, and members of his staff Christian Lee and Samantha Robin.

Pier ending a far cry from capital worries FLINDERS MP Greg Hunt was back in the political fast lane on Monday, in Canberra for the Liberal party room’s vote for a Speaker to replace Bronwyn Bishop. Three days before that he had been standing at the end of Cowes pier after completing his 19-day Walk for Autism. His walk to raise $25,000 for Amaze (Autism Victoria) and the Abacus Learning Centre, Hastings, took him 500 kilometres through his electorate, which includes the southern Mornington Peninsula and Western Port, including Phillip Island. While on his walk Mr Hunt was publicly absent from being involved in the controversy surrounding Mrs Bishop’s extensive travel expenses. In neighbouring Dunkley, Mr Hunt’s

Liberal colleague Bruce Billson assured ABC radio listeners that Mrs Bishop “will do the right thing”. This same sentiment was also expressed by the Prime Minister Tony Abbott for the next day or so, until Mrs Bishop announced she was “sorry” and would leave the Speaker’s chair. Neither Mr Billson or Mr Abbott would be dcrawn on what they thought the “right thing” was. Comparisons between Mr Hunt’s walk around his electorate – if publicised nationally - would no doubt have rivalled that of Communications Minister Malcolm Turnbull who was all too willing to be seen disembarking from a train to Geelong, a stark contrast to Mrs Bishop’s helicopter flight to the same city.

Mr Hunt was also able to miss last week’s Cabinet meeting in Adelaide which preceded the announcement by Mr Abbott of a shipbuilding package that will help unemployment in South Australia. There was no promise to save jobs in Victoria’s ailing shipbuilding sector. The hue and cry surrounding Monday’s election of Casey MP Tony Smith to the Speaker’s chair must have seemed a world away from Mr Hunt’s stroll around the highways and byways of Flinders. The walk - likely to exceed its $25,000 target - will have a direct benefit for those affected by autism. Mr Smith’s party room election was all about politics and appearances. Keith Platt