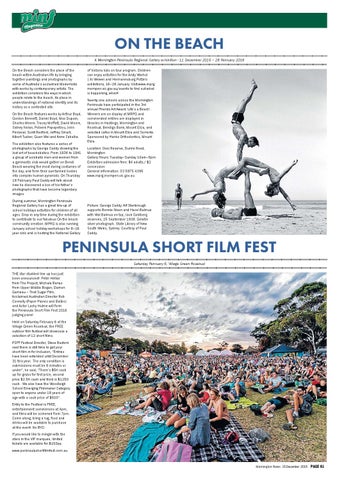 ON THE BEACH A Mornington Peninsula Regional Gallery exhibition - 11 December 2015 – 28 February 2016 On the Beach considers the place of the beach within Australian life by bringing together paintings and photographs by some of Australia’s acclaimed Modernists with works by contemporary artists. The exhibition considers the ways in which people relate to the beach, its place in understandings of national identity and its history as a contested site. On the Beach features works by Arthur Boyd, Gordon Bennett, Daniel Boyd, Max Dupain, Charles Meere, Tracey Moffatt, David Moore, Sidney Nolan, Polixeni Papapetrou, John Perceval, Scott Redford, Jeffrey Smart, Albert Tucker, Guan Wei and Anne Zahalka. The exhibition also features a series of photographs by George Caddy showing the lost art of beachobatics. From 1936 to 1941 a group of acrobatic men and women from a gymnastic club would gather on Bondi Beach wearing the most daring costumes of the day, and form their sun-tanned bodies into complex human pyramids. On Thursday 18 February Paul Caddy will talk about how he discovered a box of his father’s photographs that have become legendary images. During summer, Mornington Peninsula Regional Gallery has a great line-up of school holidays activities for children of all ages. Drop in any time during the exhibition to contribute to our fabulous On the beach community creation. MPRG is also running January school holiday workshops for 8–16 year olds and is hosting the National Gallery

PENINSULA SHORT FILM FEST Saturday February 6, Village Green Rosebud THE star studded line up has just been announced! Peter Helliar from The Project, Michala Banas from Upper Middle Bogan, Damon Gameau – That Sugar Film, Acclaimed Australian Director Rob Connolly (Paper Planes and Balibo) and Actor Lachy Hulme will form the Peninsula Short Film Fest 2016 judging panel Held on Saturday February 6 at the Village Green Rosebud, the FREE outdoor film festival will showcase a selection of 12 short films. PSFF Festival Director, Steve Bastoni said there is still time to get your short film in for inclusion, “Entries have been extended until December 31 this year. The only condition is submissions must be 8 minutes or under”, he said, “There’s $5K cash up for grabs for first prize, second prize $2.5K cash and third is $1250 cash. We also have the Woodleigh School Emerging Filmmaker Category open to anyone under 18 years of age with a cash prize of $500”. Entry to the Festival is FREE, entertainment commences at 4pm, and films will be screened from 7pm. Come along, bring a rug, food and drinks will be available to purchase at the event. No BYO. If you would like to mingle with the stars in the VIP marquee, limited tickets are available for $150pp. www.peninsulashortfilmfest.com.au