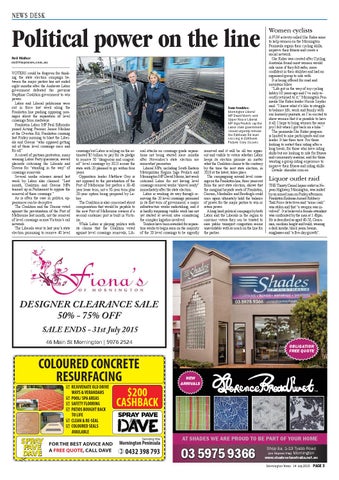 Political power on the line Neil Walker neil@mpnews.com.au VOTERS could be forgiven for thinking the state election campaign between the major parties has not ended eight months after the Andrews Labor government defeated the previous Napthine Coalition government to win power. Labor and Liberal politicians were out in force last week along the Frankston line pushing opposing messages about the separation of level crossings from roadways. Frankston Labor MP Paul Edbrooke joined Acting Premier James Merlino at the Overton Rd, Frankston crossing last Friday morning to blast the Liberals and Greens “who opposed getting rid of these level crossings once and for all”. A crowd of partisan protesters, many wearing Labor Party guernseys, waved placards criticising the Liberals and Greens for “standing in the way” of crossings removals. Several media releases issued last week by Labor also claimed: “Last month, Coalition and Greens MPs teamed up in Parliament to oppose the removal of these crossings.” As is often the case in politics, appearances can be deceptive. The Coalition and the Greens voted against the privatisation of the Port of Melbourne last month, not the removal of level crossings across Victoria’s rail network. The Liberals went to last year’s state election promising to remove 40 level

crossings but Labor is relying on the estimated $5 billion to pay for its pledge to remove 50 “dangerous and congested” level crossings by 2023 across the state with 20 planned to go within four years. Opposition leader Matthew Guy is not opposed to the privatisation of the Port of Melbourne but prefers a 30-40 year lease term, not a 50-year term plus 20-year option being proposed by Labor. The Coalition is also concerned about compensation that would be payable to the new Port of Melbourne owners if a second container port is built in Victoria. While Labor is playing politics with its claims that the Coalition voted against level crossings removals, Lib-

eral attacks on crossings grade separations not being started mere months after November’s state election are somewhat premature. Liberal MPs, including South Eastern Metropolitan Region Inga Peulich and Mornington MP David Morris, last week criticised Labor for not having level crossings removal works “shovel ready” immediately after the state election. Labor is working its way through removing the 20 level crossings promised in its first term of government, a major infrastructure works undertaking, and it is hardly surprising visible work has not yet started at several sites considering the complex logistics involved. Tenders have been awarded for separation works to begin soon on the majority of the 20 level crossings to be urgently

removed and it will be all too apparent and visible to voters whether Labor keeps its election promise no matter what the Coalition claims to the contrary by the time the next state election, in 2018 at the latest, takes place. The campaigning around level crossings on the Frankston line, three years out from the next state election, shows that the marginal bayside seats of Frankston, Carrum, Mordialloc and Bentleigh could once again ultimately hold the balance of power for the major parties to win or retain power. A long hard political campaign by both Labor and the Liberals in the region to convince voters they can be trusted to ease public transport congestion seems unavoidable with so much on the line for the parties.

Women cyclists A FUN activity called She Rides aims to help women on the Mornington Peninsula regain their cycling skills, improve their fitness and create a social network. She Rides was created after Cycling Australia found most women would ride more if they felt safer, more confident in their abilities and had an organised group to ride with. It is being offered for road and mountain bikes. “Life got in the way of my cycling hobby 10 years ago and I’ve only recently returned to it,” Mornington Peninsula She Rides leader Nicole Snyder said. “I know what it’s like to struggle to balance life, work and family with our leisurely pursuits, so I’m excited to show women that it is possible to have it all. I hope to bring women the same joy I felt when I got back on a bike.” The peninsula She Rides program is limited to nine participants and one leader. It has three tiers: For those looking to restart their riding after a long break; for those who have riding skills but are looking to ride for fitness and community reasons; and for those wanting a group riding experience to improve their fitness and riding skills. Details: sherides.com.au

Liquor outlet raid THE Thirsty Camel liquor outlet in Nepean Highway, Mornington, was raided by an armed man on Friday afternoon. Frankston Embona Armed Robbery Task Force detectives said “some cash” was stolen and that “a weapon was involved”. It is believed a female attendant was confronted by the man at 1.40pm. He is described as aged 40-50, Caucasian, medium height and build, wearing a dark hoodie, black jeans, beanie, sunglasses and “a five-day growth”.