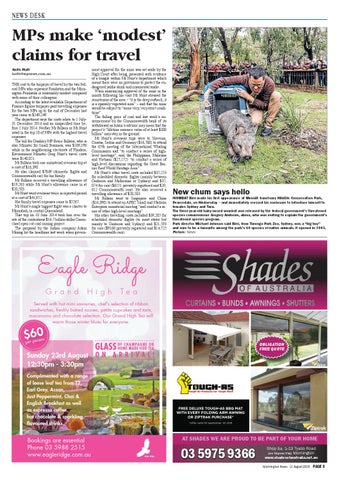 ment approval for the mine was set aside by the High Court after being presented with evidence of a bungle within Mr Hunt’s department which meant there were no provisions to protect the endangered yakka skink and ornamental snake. When announcing approval of the mine in the month following his visit Mr Hunt stressed the remoteness of the area – “it is the deep outback; it is a sparsely vegetated area” – and that the mine would be subject to “some very, very strict conditions”. The falling price of coal and last week’s announcement by the Commonwealth bank of its withdrawal as Adani’s advisor may mean that the project’s “lifetime resource value of at least $300 billion” may stay in the ground. Mr Hunt’s overseas trips were to Slovenia, Croatia, Serbia and Germany ($16,780) to attend the 65th meeting of the International Whaling Commission and “to conduct a series of highlevel meetings”; and, the Philippines, Malaysia and Vietnam ($25,172) “to conduct a series of high-level discussions regarding the Great Barrier Reef World Heritage Area”. Mr Hunt’s other travel costs included $35,253 for scheduled domestic flights (mainly between Canberra and Melbourne or Sydney) and $37, 074 for cars ($6551 privately registered and $29, 612 Commonwealth cars). He also received a travelling allowance of $20,503. Mr Billson went to Singapore and China ($16,390) to attend an APEC Small and Medium Enterprise ministerial meeting “and conduct a series of other high-level meetings”. His other travelling costs included $39,205 for scheduled domestic flights (to most states but mainly to Canberra and Sydney) and $21,593 for cars ($9166 privately registered and $14,725 Commonwealth cars).

THE cost to the taxpayer of travel by the two federal MPs who represent Frankston and the Mornington Peninsula is reasonably modest compared with some of their colleagues. According to the latest available Department of Finance figures taxpayer-paid travelling expenses for the two MPs up to the end of December last year came to $249,249. The department says the costs relate to 1 July31 December 2014 and an unspecified time before 1 July 2014. Neither Mr Billson or Mr Hunt rated in the top 10 of MPs with the highest travel expenses. The bill for Dunkley MP Bruce Billson, who is also Minister for Small Business, was $109,198 while in the neighbouring electorate of Flinders, Environment Minister Greg Hunt’s travel costs were $140,051. Mr Billson took one ministerial overseas trip at a cost of $16,390. He also claimed $7849 (domestic flights and Commonwealth car) for his family. Mr Billson received a travelling allowance of $19,263 while Mr Hunt’s allowance came in at $20,503. Mr Hunt went overseas twice in reported period at a cost of $41,952. His family travel expenses came to $5267. Mr Hunt’s single biggest flight was a charter to Moranbah, in central Queensland. That trip on 10 June 2014 took him over the site of the contentious $16.5 billion dollar Carmichael open cut coal mining project. The proposal by the Indian company Adani Mining hit the headlines last week when govern-

WOMBAT Birri made his first appearance at Moonlit Sanctuary Wildlife Conservation Park, Pearcedale, on Wednesday – and immediately crossed his enclosure to introduce himself to females Sydney and Tara. The three-year-old hairy-nosed wombat was released by the federal government’s threatened species commissioner Gregory Andrews, above, who was visiting to explain the government’s threatened species program. Park director Michael Johnson said Birri, from Taronga Park Zoo, Sydney, was a “big boy” and sure to be a favourite among the park’s 60 species of native animals. It opened in 2001. Picture: Yanni