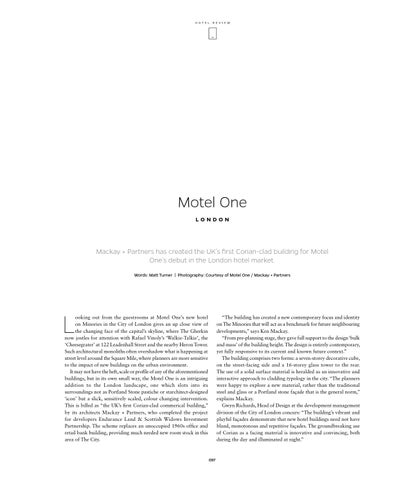 ooking out from the guestrooms at Motel One’s new hotel on Minories in the City of London gives an up close view of the changing face of the capital’s skyline, where The Gherkin now jostles for attention with Rafael Vinoly’s ‘Walkie-Talkie’, the ‘Cheesegrater’ at 122 Leadenhall Street and the nearby Heron Tower. Such architectural monoliths often overshadow what is happening at street level around the Square Mile, where planners are more sensitive to the impact of new buildings on the urban environment. It may not have the heft, scale or profile of any of the aforementioned buildings, but in its own small way, the Motel One is an intriguing addition to the London landscape, one which slots into its surroundings not as Portland Stone pastiche or starchitect-designed ‘icon’ but a slick, sensitively scaled, colour changing intervention. This is billed as “the UK’s first Corian-clad commerical building,” by its architects Mackay + Partners, who completed the project for developers Endurance Land &amp; Scottish Widows Investment Partnership. The scheme replaces an unoccupied 1960s office and retail bank building, providing much needed new room stock in this area of The City.

“The building has created a new contemporary focus and identity on The Minories that will act as a benchmark for future neighbouring developments,” says Ken Mackay. “From pre-planning stage, they gave full support to the design ‘bulk and mass’ of the building height. The design is entirely contemporary, yet fully responsive to its current and known future context.” The building comprises two forms: a seven-storey decorative cube, on the street-facing side and a 16-storey glass tower to the rear. The use of a solid surface material is heralded as an innovative and interactive approach to cladding typology in the city. “The planners were happy to explore a new material, rather than the traditional steel and glass or a Portland stone façade that is the general norm,” explains Mackay. Gwyn Richards, Head of Design at the development management division of the City of London concurs: “The building’s vibrant and playful façades demonstrate that new hotel buildings need not have bland, monotonous and repetitive façades. The groundbreaking use of Corian as a facing material is innovative and convincing, both during the day and illuminated at night.”

Sleeper Magazine Hotel Design Development Architecture. The Sleeper brand – comprising a beautifully presented magazine, and our website www.sleepermagazine.com – is targeted at all those involved in hotel design, development and architecture on an international level. It is the only media to reach all the individuals and disciplines throughout the complex supply chain involved in the delivery of new hotel projects worldwide.