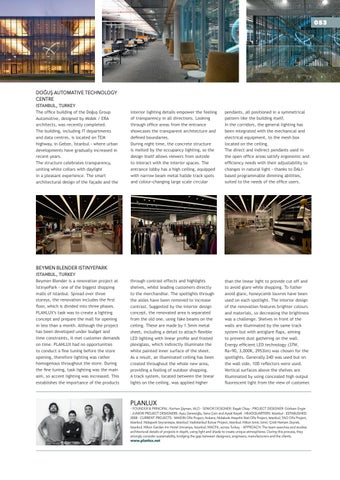 The office building of the Doğuş Group Automotive, designed by Midek / ERA architects, was recently completed. The building, including IT departments and data centres, is located on TEM highway, in Gebze, İstanbul - where urban developments have gradually increased in recent years. The structure celebrates transparency, uniting white collars with daylight in a pleasant experience. The smart architectural design of the façade and the

interior lighting details empower the feeling of transparency in all directions. Looking through office areas from the entrance showcases the transparent architecture and defined boundaries. During night time, the concrete structure is melted by the occupancy lighting, so the design itself allows viewers from outside to interact with the interior spaces. The entrance lobby has a high ceiling, equipped with narrow beam metal halide track spots and colour-changing large scale circular

pendants, all positioned in a symmetrical pattern like the building itself. In the corridors, the general lighting has been integrated with the mechanical and electrical equipment, to the mesh box located on the ceiling. The direct and indirect pendants used in the open office areas satisfy ergonomic and efficiency needs with their adjustability to changes in natural light ‐ thanks to DALIbased programmable dimming abilities, suited to the needs of the office users.

through contrast effects and highlights shelves, whilst leading customers directly to the merchandise. The spotlights through the aisles have been removed to increase contrast. Suggested by the interior design concept, the renovated area is separated from the old one, using fake beams on the ceiling. These are made by 1.5mm metal sheet, including a detail to attach flexible LED lighting with linear profile and frosted plexiglass, which indirectly illuminate the white painted inner surface of the sheet. As a result, an illuminated ceiling has been created throughout the whole new area, providing a feeling of outdoor shopping. A track system, located between the linear lights on the ceiling, was applied higher

than the linear light to provide cut off and to avoid glare while shopping. To futher avoid glare, honeycomb louvres have been used on each spotlight. The interior design of the renovation features brighter colours and materials, so decreasing the brightness was a challenge. Shelves in front of the walls are illuminated by the same track system but with antiglare flaps, aiming to prevent dust gathering on the wall. Energy efficient LED technology (37W, Ra>90, 3,000K, 2953lm) was chosen for the spotlights. Generally 24D was used but on the wall side, 10D reflectors were used. Vertical surfaces above the shelves are illuminated by using concealed high output fluorescent light from the view of customer.

Beymen Blender is a renovation project at İstinyePark ‐ one of the biggest shopping malls of Istanbul. Spread over three storeys, the renovation includes the first floor, which is divided into three phases. PLANLUX’s task was to create a lighting concept and prepare the mall for opening in less than a month. Although the project has been developed under budget and time constraints, it met customer demands on time. PLANLUX had no opportunities to conduct a fine tuning before the store opening, therefore lighting was rather homogenous throughout the store. During the fine tuning, task lighting was the main aim, so accent lighting was increased. This establishes the importance of the products