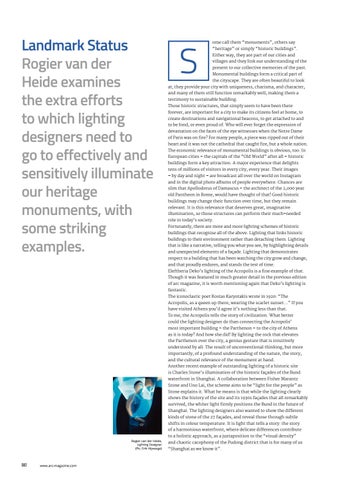 Landmark Status Rogier van der Heide examines the extra efforts to which lighting designers need to go to effectively and sensitively illuminate our heritage monuments, with some striking examples.

ome call them “monuments”, others say

“heritage” or simply “historic buildings”. Either way, they are part of our cities and

villages and they link our understanding of the present to our collective memories of the past. Monumental buildings form a critical part of

the cityscape. They are often beautiful to look

at, they provide your city with uniqueness, charisma, and character, and many of them still function remarkably well, making them a testimony to sustainable building.

Those historic structures, that simply seem to have been there

forever, are important for a city to make its citizens feel at home, to

create destinations and navigational beacons, to get attached to and to be fond, or even proud of. Who will ever forget the expression of

of Paris was on fire? For many people, a piece was ripped out of their

heart and it was not the cathedral that caught fire, but a whole nation. The economic relevance of monumental buildings is obvious, too. In European cities – the capitals of the “Old World” after all – historic buildings form a key attraction. A major experience that delights tens of millions of visitors in every city, every year. Their images

and in the digital photo albums of people everywhere. Chances are

slim that Apollodorus of Damascus – the architect of the 2,000 year old Pantheon in Rome, would have thought of that! Good historic buildings may change their function over time, but they remain relevant. It is this relevance that deserves great, imaginative

illumination, so those structures can perform their much-needed role in today’s society.

Fortunately, there are more and more lighting schemes of historic

buildings that recognise all of the above. Lighting that links historic

buildings to their environment rather than detaching them. Lighting

that is like a narrative, telling you what you see, by highlighting details and unexpected elements of a façade. Lighting that demonstrates

respect to a building that has been watching the city grow and change, and that proudly endures, and stands the test of time.

Eleftheria Deko’s lighting of the Acropolis is a fine example of that.

Though it was featured in much greater detail in the previous edition of arc magazine, it is worth mentioning again that Deko’s lighting is fantastic.

The iconoclastic poet Kostas Karyotakis wrote in 1920: “The

Acropolis, as a queen up there, wearing the scarlet sunset...” If you have visited Athens you’d agree it’s nothing less than that.

To me, the Acropolis tells the story of civilization. What better could the lighting designer do than connecting the Acropolis’

most important building – the Parthenon – to the city of Athens

as it is today? And how she did! By lighting the rock that elevates the Parthenon over the city, a genius gesture that is intuitively

understood by all. The result of unconventional thinking, but more importantly, of a profound understanding of the nature, the story, and the cultural relevance of the monument at hand.

Another recent example of outstanding lighting of a historic site

is Charles Stone’s illumination of the historic façades of the Bund waterfront in Shanghai. A collaboration between Fisher Marantz

Stone and Uno Lai, the scheme aims to be “light for the people” as Stone explains it. What he means is that while the lighting clearly

shows the history of the site and its 1930s façades that all remarkably survived, the whiter light firmly positions the Bund in the future of Shanghai. The lighting designers also wanted to show the different kinds of stone of the 27 façades, and reveal those through subtle

shifts in colour temperature. It is light that tells a story: the story

to a holistic approach, as a juxtaposition to the “visual density”

and chaotic cacophony of the Pudong district that is for many of us “Shanghai as we know it”.