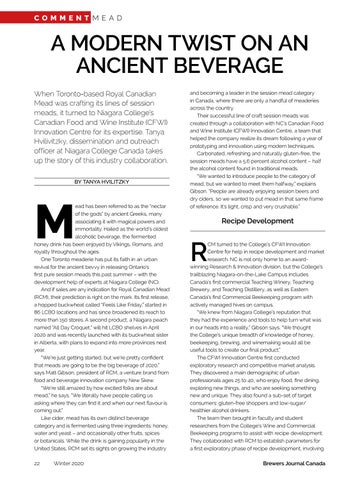 A MODERN TWIST ON AN ANCIENT BEVERAGE When Toronto-based Royal Canadian Mead was crafting its lines of session meads, it turned to Niagara College’s Canadian Food and Wine Institute (CFWI) Innovation Centre for its expertise. Tanya Hvilivitzky, dissemination and outreach officer at Niagara College Canada takes up the story of this industry collaboration. BY TANYA HVILITZKY

ead has been referred to as the “nectar of the gods” by ancient Greeks, many associating it with magical powers and immortality. Hailed as the world’s oldest alcoholic beverage, the fermented honey drink has been enjoyed by Vikings, Romans, and royalty throughout the ages. One Toronto meaderie has put its faith in an urban revival for the ancient bevvy in releasing Ontario’s first pure session meads this past summer – with the development help of experts at Niagara College (NC). And if sales are any indication for Royal Canadian Mead (RCM), their prediction is right on the mark. Its first release, a hopped buckwheat called “Feels Like Friday,” started in 86 LCBO locations and has since broadened its reach to more than 150 stores. A second product, a Niagara peach named “All Day Croquet,” will hit LCBO shelves in April 2020 and was recently launched with its buckwheat sister in Alberta, with plans to expand into more provinces next year. “We’re just getting started, but we’re pretty confident that meads are going to be the big beverage of 2020,” says Matt Gibson, president of RCM, a venture brand from food and beverage innovation company New Skew. “We’re still amazed by how excited folks are about mead,” he says. “We literally have people calling us asking where they can find it and when our next flavour is coming out.” Like cider, mead has its own distinct beverage category and is fermented using three ingredients: honey, water and yeast – and occasionally other fruits, spices or botanicals. While the drink is gaining popularity in the United States, RCM set its sights on growing the industry

and becoming a leader in the session mead category in Canada, where there are only a handful of meaderies across the country. Their successful line of craft session meads was created through a collaboration with NC’s Canadian Food and Wine Institute (CFWI) Innovation Centre, a team that helped the company realize its dream following a year of prototyping and innovation using modern techniques. Carbonated, refreshing and naturally gluten-free, the session meads have a 5.6 percent alcohol content – half the alcohol content found in traditional meads. “We wanted to introduce people to the category of mead, but we wanted to meet them halfway,” explains Gibson. “People are already enjoying session beers and dry ciders, so we wanted to put mead in that same frame of reference. It’s light, crisp and very crushable.”

CM turned to the College’s CFWI Innovation Centre for help in recipe development and market research. NC is not only home to an awardwinning Research & Innovation division, but the College’s trailblazing Niagara-on-the-Lake Campus includes Canada’s first commercial Teaching Winery, Teaching Brewery, and Teaching Distillery, as well as Eastern Canada’s first Commercial Beekeeping program with actively managed hives on campus. “We knew from Niagara College’s reputation that they had the experience and tools to help turn what was in our heads into a reality,” Gibson says. “We thought the College’s unique breadth of knowledge of honey, beekeeping, brewing, and winemaking would all be useful tools to create our final product.” The CFWI Innovation Centre first conducted exploratory research and competitive market analysis. They discovered a main demographic of urban professionals ages 25 to 40, who enjoy food, fine dining, exploring new things, and who are seeking something new and unique. They also found a sub-set of target consumers: gluten-free shoppers and low-sugar/ healthier alcohol drinkers. The team then brought in faculty and student researchers from the College’s Wine and Commercial Beekeeping programs to assist with recipe development. They collaborated with RCM to establish parameters for a first exploratory phase of recipe development, involving The magazine for the Canadian brewing industry

The magazine for the Canadian brewing industry