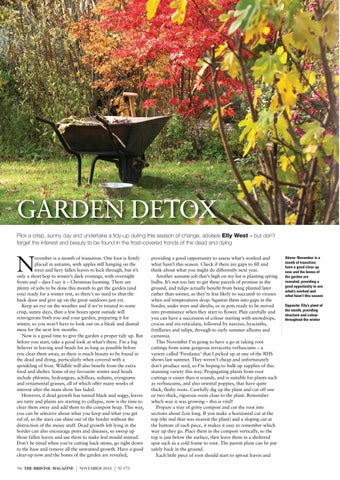 GARDEN DETOX Pick a crisp, sunny day and undertake a tidy-up during this season of change, advises Elly West – but don’t forget the interest and beauty to be found in the frost-covered fronds of the dead and dying

ovember is a month of transition. One foot is firmly placed in autumn, with apples still hanging on the trees and fiery fallen leaves to kick through, but it’s only a short hop to winter’s dark evenings, with overnight frosts and – dare I say it – Christmas looming. There are plenty of jobs to be done this month to get the garden (and you) ready for a winter rest, so there’s no need to shut the back door and give up on the great outdoors just yet. Keep an eye on the weather and if we’re treated to some crisp, sunny days, then a few hours spent outside will reinvigorate both you and your garden, preparing it for winter, so you won’t have to look out on a bleak and dismal mess for the next few months. Now is a good time to give the garden a proper tidy up. But before you start, take a good look at what’s there. I’m a big believer in leaving seed heads for as long as possible before you clear them away, as there is much beauty to be found in the dead and dying, particularly when covered with a sprinkling of frost. Wildlife will also benefit from the extra food and shelter. Some of my favourite winter seed heads include phlomis, hydrangeas, achilleas, sedums, eryngiums and ornamental grasses, all of which offer many weeks of interest after the main show has faded. However, if dead growth has turned black and soggy, leaves are tatty and plants are starting to collapse, now is the time to clear them away and add them to the compost heap. This way, you can be selective about what you keep and what you get rid of, so the stars can shine out of the border without the distraction of the messy stuff. Dead growth left lying in the border can also encourage pests and diseases, so sweep up those fallen leaves and use them to make leaf mould instead. Don’t be timid when you’re cutting back stems, go right down to the base and remove all the unwanted growth. Have a good clear-up now and the bones of the garden are revealed, 94 THE BRISTOL MAGAZINE

providing a good opportunity to assess what’s worked and what hasn’t this season. Check if there are gaps to fill and think about what you might do differently next year. Another autumn job that’s high on my list is planting spring bulbs. It’s not too late to get these parcels of promise in the ground, and tulips actually benefit from being planted later rather than sooner, as they’re less likely to succumb to viruses when soil temperatures drop. Squeeze them into gaps in the border, under trees and shrubs, or in pots ready to be moved into prominence when they start to flower. Plan carefully and you can have a succession of colour starting with snowdrops, crocus and iris reticulata, followed by narcissi, hyacinths, fritillaries and tulips, through to early summer alliums and camassia. This November I’m going to have a go at taking root cuttings from some gorgeous terracotta verbascums – a variety called ‘Firedance’ that I picked up at one of the RHS shows last summer. They weren’t cheap and unfortunately don’t produce seed, so I’m hoping to bulk up supplies of this stunning variety this way. Propagating plants from root cuttings is easier than it sounds, and is suitable for plants such as verbascums, and also oriental poppies, that have quite thick, fleshy roots. Carefully dig up the plant and cut off one or two thick, vigorous roots close to the plant. Remember which way it was growing – this is vital! Prepare a tray of gritty compost and cut the root into sections about 2cm long. If you make a horizontal cut at the top (the end that was nearest the plant) and a sloping cut at the bottom of each piece, it makes it easy to remember which way up they go. Place them in the compost vertically, so the top is just below the surface, then leave them in a sheltered spot such as a cold frame to root. The parent plant can be put safely back in the ground. Each little piece of root should start to sprout leaves and

Above: November is a month of transition; have a good clear-up now and the bones of the garden are revealed, providing a good opportunity to see what’s worked and what hasn’t this season Opposite: Elly’s plant of the month, providing structure and colour throughout the winter