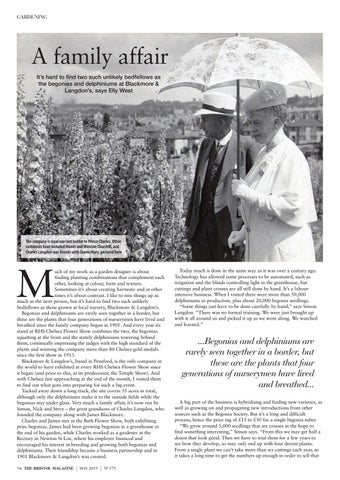 A family affair It’s hard to find two such unlikely bedfellows as the begonias and delphiniums at Blackmore & Langdon’s, says Elly West

The company is royal warrant holder to Prince Charles. Other customers have included Monet and Winston Churchill, and Charles Langdon was friends with Queen Mary, pictured here

uch of my work as a garden designer is about finding planting combinations that complement each other, looking at colour, form and texture. Sometimes it’s about creating harmony and at other times it’s about contrast. I like to mix things up as much as the next person, but it’s hard to find two such unlikely bedfellows as those grown at local nursery, Blackmore & Langdon’s. Begonias and delphiniums are rarely seen together in a border, but these are the plants that four generations of nurserymen have lived and breathed since the family company began in 1901. And every year its stand at RHS Chelsea Flower Show combines the two, the begonias squatting at the front and the stately delphiniums towering behind them, continually impressing the judges with the high standard of the plants and winning the company more than 80 Chelsea gold medals since the first show in 1913. Blackmore & Langdon’s, based in Pensford, is the only company in the world to have exhibited at every RHS Chelsea Flower Show since it began (and prior to this, at its predecessor, the Temple Show). And with Chelsea fast approaching at the end of the month, I visited them to find out what goes into preparing for such a big event. Tucked away down a long track, the site covers 35 acres in total, although only the delphiniums make it to the outside fields while the begonias stay under glass. Very much a family affair, it’s now run by Simon, Nick and Steve – the great grandsons of Charles Langdon, who founded the company along with James Blackmore. Charles and James met at the Bath Flower Show, both exhibiting prize begonias. James had been growing begonias in a greenhouse at the end of his garden, while Charles worked as a gardener at the Rectory in Newton St Loe, where his employer financed and encouraged his interest in breeding and growing both begonias and delphiniums. Their friendship became a business partnership and in 1901 Blackmore & Langdon’s was created. 94 THE BRISTOL MAGAZINE

Today much is done in the same way as it was over a century ago. Technology has allowed some processes to be automated, such as irrigation and the blinds controlling light in the greenhouse, but cuttings and plant crosses are all still done by hand. It’s a labourintensive business. When I visited there were more than 50,000 delphiniums in production, plus about 20,000 begonia seedlings. “Some things just have to be done carefully by hand,” says Simon Langdon. “There was no formal training. We were just brought up with it all around us and picked it up as we went along. We watched and learned.”

...Begonias and delphiniums are rarely seen together in a border, but these are the plants that four generations of nurserymen have lived and breathed... A big part of the business is hybridising and finding new varieties, as well as growing on and propagating new introductions from other sources such as the Begonia Society. But it’s a long and difficult process, hence the price tag of £15 to £30 for a single begonia tuber. “We grow around 5,000 seedlings that are crosses in the hope to find something interesting,” Simon says. “From this we may get half a dozen that look good. Then we have to trial them for a few years to see how they develop, so may only end up with four decent plants. From a single plant we can’t take more than six cuttings each year, so it takes a long time to get the numbers up enough in order to sell that

The Bristol Magazine May 2019

The Bristol Magazine May 2019