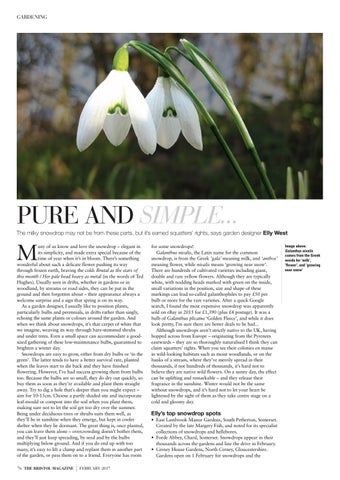 The milky snowdrop may not be from these parts, but it’s earned squatters’ rights, says garden designer Elly West

any of us know and love the snowdrop – elegant in its simplicity, and made extra special because of the time of year when it’s in bloom. There’s something wonderful about such a delicate flower pushing its way through frozen earth, braving the cold: Brutal as the stars of this month / Her pale head heavy as metal (in the words of Ted Hughes). Usually seen in drifts, whether in gardens or in woodland, by streams or road sides, they can be put in the ground and then forgotten about – their appearance always a welcome surprise and a sign that spring is on its way. As a garden designer, I usually like to position plants, particularly bulbs and perennials, in drifts rather than singly, echoing the same plants or colours around the garden. And when we think about snowdrops, it’s that carpet of white that we imagine, weaving its way through bare-stemmed shrubs and under trees. Even a small space can accommodate a goodsized gathering of these low-maintenance bulbs, guaranteed to brighten a winter day. Snowdrops are easy to grow, either from dry bulbs or ‘in the green’. The latter tends to have a better survival rate, planted when the leaves start to die back and they have finished flowering. However, I’ve had success growing them from bulbs too. Because the bulbs are so small, they do dry out quickly, so buy them as soon as they’re available and plant them straight away. Try to dig a hole that’s deeper than you might expect – aim for 10-15cm. Choose a partly shaded site and incorporate leaf-mould or compost into the soil when you plant them, making sure not to let the soil get too dry over the summer. Being under deciduous trees or shrubs suits them well, as they’ll be in sunshine when they emerge, but kept in cooler shelter when they lie dormant. The great thing is, once planted, you can leave them alone – overcrowding doesn’t bother them, and they’ll just keep spreading, by seed and by the bulbs multiplying below ground. And if you do end up with too many, it’s easy to lift a clump and replant them in another part of the garden, or pass them on to a friend. Everyone has room 76 THE BRISTOL MAGAZINE

for some snowdrops! Galanthus nivalis, the Latin name for the common snowdrop, is from the Greek ‘gala’ meaning milk, and ‘anthos’ meaning flower, while nivalis means ‘growing near snow’. There are hundreds of cultivated varieties including giant, double and rare yellow flowers. Although they are typically white, with nodding heads marked with green on the inside, small variations in the position, size and shape of these markings can lead so-called galanthophiles to pay £50 per bulb or more for the rare varieties. After a quick Google search, I found the most expensive snowdrop was apparently sold on eBay in 2015 for £1,390 (plus £4 postage). It was a bulb of Galanthus plicatus ‘Golden Fleece’, and while it does look pretty, I’m sure there are better deals to be had... Although snowdrops aren’t strictly native to the UK, having hopped across from Europe – originating from the Pyrenees eastwards – they are so thoroughly naturalised I think they can claim squatters’ rights. When you see their colonies en masse in wild-looking habitats such as moist woodlands, or on the banks of a stream, where they’ve merrily spread in their thousands, if not hundreds of thousands, it’s hard not to believe they are native wild flowers. On a sunny day, the effect can be uplifting and remarkable – and they release their fragrance in the sunshine. Winter would not be the same without snowdrops, and it’s hard not to let your heart be lightened by the sight of them as they take centre stage on a cold and gloomy day.

Elly’s top snowdrop spots • East Lambrook Manor Gardens, South Petherton, Somerset. Created by the late Margery Fish, and noted for its specialist collections of snowdrops and hellebores. • Forde Abbey, Chard, Somerset. Snowdrops appear in their thousands across the gardens and line the drive in February. • Cerney House Gardens, North Cerney, Gloucestershire. Gardens open on 1 February for snowdrops and the

Image above: Galanthus nivalis comes from the Greek words for ‘milk’, ‘flower’, and ‘growing near snow’