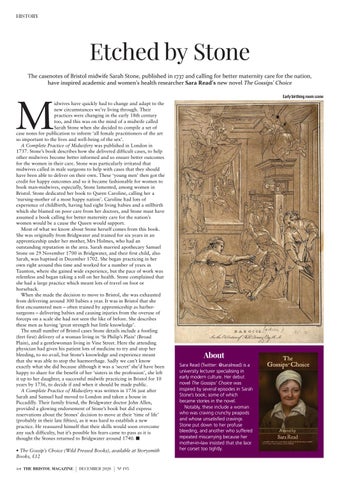 idwives have quickly had to change and adapt to the new circumstances we’re living through. Their practices were changing in the early 18th century too, and this was on the mind of a midwife called Sarah Stone when she decided to compile a set of case notes for publication to inform ‘all female practitioners of the art so important to the lives and well-being of the sex’. A Complete Practice of Midwifery was published in London in 1737. Stone’s book describes how she delivered difficult cases, to help other midwives become better informed and so ensure better outcomes for the women in their care. Stone was particularly irritated that midwives called in male surgeons to help with cases that they should have been able to deliver on their own. These ‘young men’ then got the credit for happy outcomes and so it became fashionable for women to book man-midwives, especially, Stone lamented, among women in Bristol. Stone dedicated her book to Queen Caroline, calling her a ‘nursing-mother of a most happy nation’. Caroline had lots of experience of childbirth, having had eight living babies and a stillbirth which she blamed on poor care from her doctors, and Stone must have assumed a book calling for better maternity care for the nation’s women would be a cause the Queen would support. Most of what we know about Stone herself comes from this book. She was originally from Bridgwater and trained for six years in an apprenticeship under her mother, Mrs Holmes, who had an outstanding reputation in the area. Sarah married apothecary Samuel Stone on 29 November 1700 in Bridgwater, and their first child, also Sarah, was baptised in December 1702. She began practicing in her own right around this time and worked for a number of years in Taunton, where she gained wide experience, but the pace of work was relentless and began taking a toll on her health. Stone complained that she had a large practice which meant lots of travel on foot or horseback. When she made the decision to move to Bristol, she was exhausted from delivering around 300 babies a year. It was in Bristol that she first encountered men – often trained by apprenticeship as barbersurgeons – delivering babies and causing injuries from the overuse of forceps on a scale she had not seen the like of before. She describes these men as having ‘great strength but little knowledge’. The small number of Bristol cases Stone details include a footling (feet first) delivery of a woman living in ‘St Philip’s Plain’ (Broad Plain), and a gentlewoman living in Vine Street. Here the attending physician had given his patient lots of medicine to try and stop her bleeding, to no avail, but Stone’s knowledge and experience meant that she was able to stop the haemorrhage. Sadly we can’t know exactly what she did because although it was a ‘secret’ she’d have been happy to share for the benefit of her ‘sisters in the profession’, she left it up to her daughter, a successful midwife practicing in Bristol for 10 years by 1736, to decide if and when it should be made public. A Complete Practice of Midwifery was written in 1736 just after Sarah and Samuel had moved to London and taken a house in Piccadilly. Their family friend, the Bridgwater doctor John Allen, provided a glowing endorsement of Stone’s book but did express reservations about the Stones’ decision to move at their ‘time of life’ (probably in their late fifties), as it was hard to establish a new practice. He reassured himself that their skills would soon overcome any such difficulty, but it’s possible his fears came to pass as it is thought the Stones returned to Bridgwater around 1740. ■ • The Gossip’s Choice (Wild Pressed Books), available at Storysmith Books, £12 64 THE BRISTOL MAGAZINE

About Sara Read (Twitter: @saralread) is a university lecturer specialising in early modern culture. Her debut novel The Gossips’ Choice was inspired by several episodes in Sarah Stone’s book; some of which became stories in the novel. Notably, these include a woman who was craving crunchy peapods and whose unsatisfied cravings Stone put down to her profuse bleeding, and another who suffered repeated miscarrying because her mother-in-law insisted that she lace her corset too tightly.