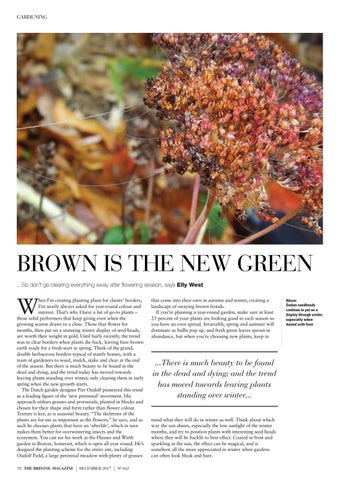 BROWN IS THE NEW GREEN ...So don’t go clearing everything away after flowering season, says Elly West

hen I’m creating planting plans for clients’ borders, I’m nearly always asked for year-round colour and interest. That’s why I have a list of go-to plants – those solid performers that keep giving even when the growing season draws to a close. Those that flower for months, then put on a stunning winter display of seed heads, are worth their weight in gold. Until fairly recently, the trend was to clear borders when plants die back, leaving bare brown earth ready for a fresh start in spring. Think of the grand, double herbaceous borders typical of stately homes, with a team of gardeners to weed, mulch, stake and clear at the end of the season. But there is much beauty to be found in the dead and dying, and the trend today has moved towards leaving plants standing over winter, only clearing them in early spring when the new growth starts. The Dutch garden designer Piet Oudolf pioneered this trend as a leading figure of the ‘new perennial’ movement. His approach utilises grasses and perennials, planted in blocks and chosen for their shape and form rather than flower colour. Texture is key, as is seasonal beauty. “The skeletons of the plants are for me as important as the flowers,” he says, and as such he chooses plants that have an ‘afterlife’, which in turn makes them better for overwintering insects and the ecosystem. You can see his work at the Hauser and Wirth garden in Bruton, Somerset, which is open all year round. He’s designed the planting scheme for the entire site, including Oudolf Field, a large perennial meadow with plenty of grasses 92 THE BRISTOL MAGAZINE

that come into their own in autumn and winter, creating a landscape of swaying brown fronds. If you’re planning a year-round garden, make sure at least 25 percent of your plants are looking good in each season so you have an even spread. Invariably, spring and summer will dominate as bulbs pop up, and fresh green leaves sprout in abundance, but when you’re choosing new plants, keep in

...There is much beauty to be found in the dead and dying; and the trend has moved towards leaving plants standing over winter... mind what they will do in winter as well. Think about which way the sun shines, especially the low sunlight of the winter months, and try to position plants with interesting seed heads where they will be backlit to best effect. Coated in frost and sparkling in the sun, the effect can be magical, and is somehow all the more appreciated in winter when gardens can often look bleak and bare.

Above: Sedum seedheads continue to put on a display through winter, especially when dusted with frost