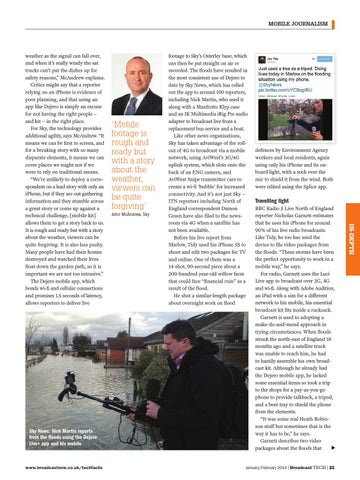 Sky News: Nick Martin reports from the floods using the Dejero Live+ app and his mobile

‘Mobile footage is rough and ready but with a story about the weather, viewers can be quite forgiving’ John McAndrew, Sky

footage to Sky’s Osterley base, which can then be put straight on air or recorded. The floods have resulted in the most consistent use of Dejero to date by Sky News, which has rolled out the app to around 100 reporters, including Nick Martin, who used it along with a Manfrotto Klyp case and an IK Multimedia iRig Pre audio adapter to broadcast live from a replacement bus service and a boat. Like other news organisations, Sky has taken advantage of the rollout of 4G to broadcast via a mobile network, using AviWest’s 3G/4G uplink system, which slots onto the back of an ENG camera, and AviWest Snipe transmitter cars to create a wi-fi ‘bubble’ for increased connectivity. And it’s not just Sky – ITN reporters including North of England correspondent Damon Green have also filed to the newsroom via 4G when a satellite has not been available. Before his live report from Marlow, Tidy used his iPhone 5S to shoot and edit two packages for TV and online. One of them was a 14-shot, 90-second piece about a 200-hundred year-old willow farm that could face “financial ruin” as a result of the flood. He shot a similar-length package about overnight work on flood

defences by Environment Agency workers and local residents, again using only his iPhone and its onboard light, with a sock over the mic to shield it from the wind. Both were edited using the Splice app.

Travelling light BBC Radio 5 Live North of England reporter Nicholas Garnett estimates that he uses his iPhone for around 90% of his live radio broadcasts. Like Tidy, he too has used the device to file video packages from the floods. “These storms have been the perfect opportunity to work in a mobile way,” he says. For radio, Garnett uses the Luci Live app to broadcast over 3G, 4G and wi-fi. Along with Adobe Audition, an iPad with a sim for a different network to his mobile, his essential broadcast kit fits inside a rucksack. Garnett is used to adopting a make-do-and-mend approach in trying circumstances. When floods struck the north-east of England 18 months ago and a satellite truck was unable to reach him, he had to hastily assemble his own broadcast kit. Although he already had the Dejero mobile app, he lacked some essential items so took a trip to the shops for a pay-as-you-go phone to provide talkback, a tripod, and a beer tray to shield the phone from the elements. “It was some real Heath Robinson stuff but sometimes that is the way it has to be,” he says. Garnett describes two video u packages about the floods that

weather as the signal can fall over, and when it’s really windy the sat trucks can’t put the dishes up for safety reasons,” McAndrew explains. Critics might say that a reporter relying on an iPhone is evidence of poor planning, and that using an app like Dejero is simply an excuse for not having the right people – and kit – in the right place. For Sky, the technology provides additional agility, says McAndrew. “It means we can be first to screen, and for a breaking story with so many disparate elements, it means we can cover places we might not if we were to rely on traditional means. “We’re unlikely to deploy a correspondent on a lead story with only an iPhone, but if they are out gathering information and they stumble across a great story or come up against a technical challenge, [mobile kit] allows them to get a story back to us. It is rough and ready but with a story about the weather, viewers can be quite forgiving. It is also less pushy. Many people have had their homes destroyed and watched their lives float down the garden path, so it is important we are not too intrusive.” The Dejero mobile app, which bonds wi-fi and cellular connections and promises 1.5 seconds of latency, allows reporters to deliver live