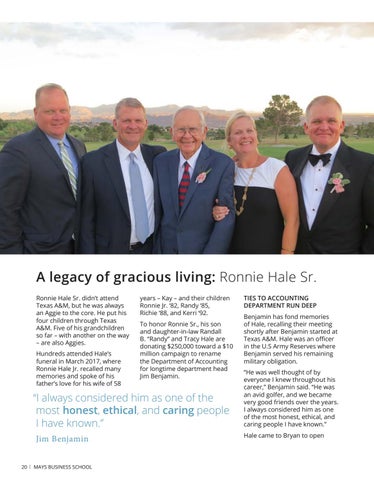 A legacy of gracious living: Ronnie Hale Sr. Ronnie Hale Sr. didn’t attend Texas A&amp;M, but he was always an Aggie to the core. He put his four children through Texas A&amp;M. Five of his grandchildren so far – with another on the way – are also Aggies. Hundreds attended Hale’s funeral in March 2017, where Ronnie Hale Jr. recalled many memories and spoke of his father’s love for his wife of 58

years – Kay – and their children Ronnie Jr. ‘82, Randy ‘85, Richie ‘88, and Kerri ‘92. To honor Ronnie Sr., his son and daughter-in-law Randall B. “Randy” and Tracy Hale are donating $250,000 toward a $10 million campaign to rename the Department of Accounting for longtime department head Jim Benjamin.

“I always considered him as one of the most honest, ethical, and caring people I have known.” Jim Benjamin 20

TIES TO ACCOUNTING DEPARTMENT RUN DEEP Benjamin has fond memories of Hale, recalling their meeting shortly after Benjamin started at Texas A&amp;M. Hale was an officer in the U.S Army Reserves where Benjamin served his remaining military obligation. “He was well thought of by everyone I knew throughout his career,” Benjamin said. “He was an avid golfer, and we became very good friends over the years. I always considered him as one of the most honest, ethical, and caring people I have known.” Hale came to Bryan to open

We are appreciative of you, our benefactors, who provide generous support in so many ways. Your continued support is actively moving Mays Business School forward in our vision of advancing the world's prosperity through our mission of being a vibrant learning organization that creates impactful knowledge and develops transformational leaders, as you will see in the pages of this edition of the Benefactor. We are truly thankful for all you do for our students, our school, and our future. 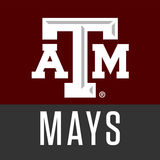