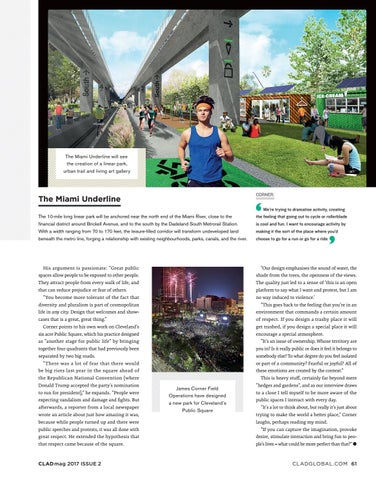 The Miami Underline will see the creation of a linear park, urban trail and living art gallery

The 10-mile long linear park will be anchored near the north end of the Miami River, close to the

the feeling that going out to cycle or rollerblade

financial district around Brickell Avenue, and to the south by the Dadeland South Metrorail Station.

is cool and fun. I want to encourage activity by

With a width ranging from 70 to 170 feet, the leisure-filled corridor will transform undeveloped land

making it the sort of the place where you’d

beneath the metro line, forging a relationship with existing neighbourhoods, parks, canals, and the river.

His argument is passionate: “Great public spaces allow people to be exposed to other people. They attract people from every walk of life, and that can reduce prejudice or fear of others. “You become more tolerant of the fact that diversity and pluralism is part of cosmopolitan life in any city. Design that welcomes and showcases that is a great, great thing.” Corner points to his own work on Cleveland’s six acre Public Square, which his practice designed as “another stage for public life” by bringing together four quadrants that had previously been separated by two big roads. “There was a lot of fear that there would be big riots last year in the square ahead of the Republican National Convention [where Donald Trump accepted the party’s nomination to run for president],” he expands. “People were expecting vandalism and damage and fights. But afterwards, a reporter from a local newspaper wrote an article about just how amazing it was, because while people turned up and there were public speeches and protests, it was all done with great respect. He extended the hypothesis that that respect came because of the square.

“Our design emphasises the sound of water, the shade from the trees, the openness of the views. The quality just led to a sense of ‘this is an open platform to say what I want and protest, but I am no way induced to violence.’ “This goes back to the feeling that you’re in an environment that commands a certain amount of respect. If you design a trashy place it will get trashed, if you design a special place it will encourage a special atmosphere. “It’s an issue of ownership. Whose territory are you in? Is it really public or does it feel it belongs to somebody else? To what degree do you feel isolated or part of a community? Fearful or joyful? All of these emotions are created by the context.” This is heavy stuff, certainly far beyond mere “hedges and gardens”, and as our interview draws to a close I tell myself to be more aware of the public spaces I interact with every day. “It’s a lot to think about, but really it’s just about trying to make the world a better place,” Corner laughs, perhaps reading my mind. “If you can capture the imagination, provoke desire, stimulate interaction and bring fun to people’s lives – what could be more perfect than that?” ●