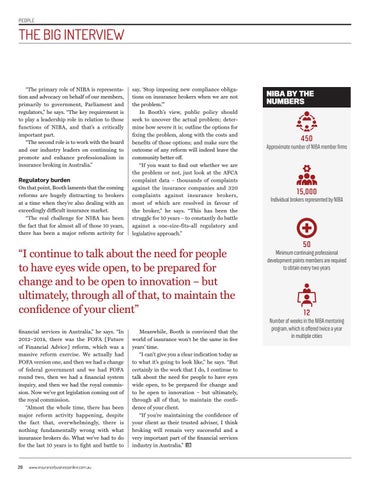 “The primary role of NIBA is representation and advocacy on behalf of our members, primarily to government, Parliament and regulators,” he says. “The key requirement is to play a leadership role in relation to those functions of NIBA, and that’s a critically important part. “The second role is to work with the board and our industry leaders on continuing to promote and enhance professionalism in insurance broking in Australia.”

Regulatory burden On that point, Booth laments that the coming reforms are hugely distracting to brokers at a time when they’re also dealing with an exceedingly difficult insurance market. “The real challenge for NIBA has been the fact that for almost all of those 10 years, there has been a major reform activity for

say, ‘Stop imposing new compliance obligations on insurance brokers when we are not the problem.’” In Booth’s view, public policy should seek to uncover the actual problem; determine how severe it is; outline the options for fixing the problem, along with the costs and benefits of those options; and make sure the outcome of any reform will indeed leave the community better off. “If you want to find out whether we are the problem or not, just look at the AFCA complaint data – thousands of complaints against the insurance companies and 320 complaints against insurance brokers, most of which are resolved in favour of the broker,” he says. “This has been the struggle for 10 years – to constantly do battle against a one-size-fits-all regulatory and legislative approach.”

“I continue to talk about the need for people to have eyes wide open, to be prepared for change and to be open to innovation – but ultimately, through all of that, to maintain the confidence of your client” financial services in Australia,” he says. “In 2012–2014, there was the FOFA [Future of Financial Advice] reform, which was a massive reform exercise. We actually had FOFA version one, and then we had a change of federal government and we had FOFA round two, then we had a financial system inquiry, and then we had the royal commission. Now we’ve got legislation coming out of the royal commission. “Almost the whole time, there has been major reform activity happening, despite the fact that, overwhelmingly, there is nothing fundamentally wrong with what insurance brokers do. What we’ve had to do for the last 10 years is to fight and battle to

Meanwhile, Booth is convinced that the world of insurance won’t be the same in five years’ time. “I can’t give you a clear indication today as to what it’s going to look like,” he says. “But certainly in the work that I do, I continue to talk about the need for people to have eyes wide open, to be prepared for change and to be open to innovation – but ultimately, through all of that, to maintain the confidence of your client. “If you’re maintaining the confidence of your client as their trusted adviser, I think broking will remain very successful and a very important part of the financial services industry in Australia.”

NIBA BY THE NUMBERS

12 Number of weeks in the NIBA mentoring program, which is offered twice a year in multiple cities

Inaction on climate change could cost the industry dearly

From small changes to huge gains

Three minor adjustments that will result in a huge productivity boost