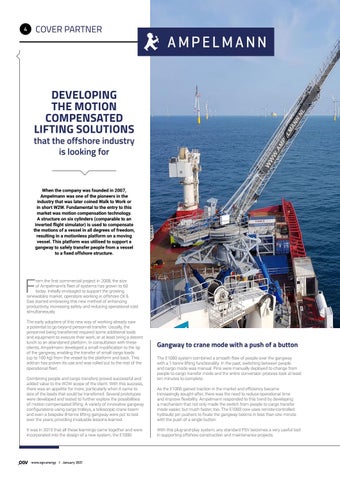 that the offshore industry is looking for

When the company was founded in 2007, Ampelmann was one of the pioneers in the industry that was later coined Walk to Work or in short W2W. Fundamental to the entry to this market was motion compensation technology. A structure on six cylinders (comparable to an inverted flight simulator) is used to compensate the motions of a vessel in all degrees of freedom, resulting in a motionless platform on a moving vessel. This platform was utilised to support a gangway to safely transfer people from a vessel to a fixed offshore structure.

rom the first commercial project in 2008, the size of Ampelmannâ&amp;#x20AC;&amp;#x2122;s fleet of systems has grown to 60 today. Initially envisaged to support the growing renewables market, operators working in offshore Oil &amp; Gas started embracing this new method of enhancing productivity, increasing safety and reducing operational cost simultaneously. The early adopters of this new way of working already saw a potential to go beyond personnel transfer. Usually, the personnel being transferred required some additional tools and equipment to execute their work, or at least bring a decent lunch to an abandoned platform. In consultation with these clients, Ampelmann developed a small modification to the tip of the gangway, enabling the transfer of small cargo loads (up to 100 kg) from the vessel to the platform and back. This add-on has proven its use and was rolled out to the rest of the operational fleet. Combining people and cargo transfers proved successful and added value to the W2W scope of the client. With this success, there was an appetite for more, particularly when it came to size of the loads that could be transferred. Several prototypes were developed and tested to further explore the possibilities of motion compensated lifting. A variety of innovative gangway configurations using cargo trolleys, a telescopic crane boom and even a bespoke 8-tonne lifting gangway were put to test over the years, providing invaluable lessons learned. It was in 2015 that all these learnings came together and were incorporated into the design of a new system, the E1000.

Gangway to crane mode with a push of a button The E1000 system combined a smooth flow of people over the gangway with a 1-tonne lifting functionality. In the past, switching between people and cargo mode was manual. Pins were manually deployed to change from people to cargo transfer mode and the entire conversion process took at least ten minutes to complete. As the E1000 gained traction in the market and efficiency became increasingly sought-after, there was the need to reduce operational time and improve flexibility. Ampelmann responded to this trend by developing a mechanism that not only made the switch from people to cargo transfer mode easier, but much faster, too. The E1000 now uses remote-controlled hydraulic pin pushers to fixate the gangway booms in less than one minute with the push of a single button. With this plug-and-play system, any standard PSV becomes a very useful tool in supporting offshore construction and maintenance projects. 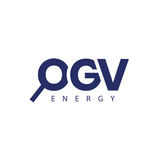