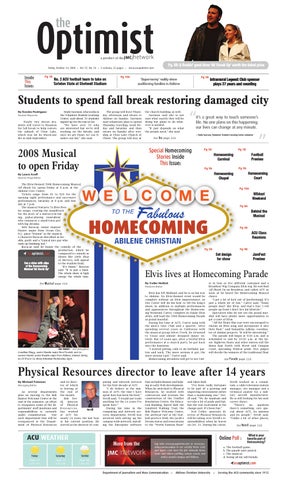 a product of the JMC

Pg. 8B: A Rockin’ good time: ‘All Shook Up’ worth the ticket price

No. 2 ACU football team to take on Tarleton State at Shotwell Stadium

Nearly two dozen students will travel to Houston for fall break to help restore the suburb of Clear Lake, which was hit by Hurricane Ike in mid-September.

Emily Garrison, who works in the Volunteer Student-Learning Center, said about 20 students signed up for the trip so far. “We have over 20 who are interested but we’re still working on the details, and once we get those, we can finalize our list,” she said.

The group will leave Thursday afternoon and return to Abilene on Sunday. Garrison said volunteers plan to spend Thursday traveling, work Friday and Saturday and then return on Sunday after worship at Clear Lake Church of Christ. The group will stay at

the church building as well. Garrison said she is not sure what exactly they will be doing but plans to do whatever is needed. “It just depends on what the people need,” she said. See

It’s a great way to touch someone’s life. No one plans on this happening; our lives can change at any minute. :: Emily Garrison, Volunteer Student-Learning Center volunteer

Special Homecoming Stories Inside This Issue:

The Elvis-themed 2008 Homecoming Musical, All Shook Up, opens Friday at 8 p.m. at the Abilene Civic Center. Tickets range from $5 to $18 for the opening night performance and successive performances, Saturday at 8 p.m. and Sunday at 2 p.m. The musical features 24 Elvis Presley songs, creating the soundtrack for the story of a motorcycle-riding, guitar-playing roustabout who romances a small-town girl with big dreams. Seth Bazacas, senior musical theatre major from Ocean City, N.J., plays “Dennis” in the musical, a character Bazacas described as lovable, goofy and a “typical nice guy who ends up finishing last.” Bazacas said he hopes the comedy of the production, which he compared to comedy in acuoptimist.com shows like Little Shop of Horrors, will appeal See a video with clips to the student body. of the Homecoming “It’s funny,” Bazacas Musical ‘All Shook Up’ said. “It is just a blast. The whole show is high energy the whole time.

Behind the Musical Pg 4A

Elvis has left Midland, and he is on his way to Abilene. No Elvis-themed event would be complete without an Elvis impersonator, so Dee Carter will do his best to fill the King’s shoes. In addition to multiple performances and appearances throughout the Homecoming Weekend, Carter, complete in classic Elvis attire, will lead the 2008 Homecoming Parade as grand marshal. During his time at ACU, Carter sang with the men’s Glee Club and a quartet. After spending several years in California with the musical group Silver Creek, he returned to Texas and almost dropped music entirely. But 10 years ago, after a fateful Elvis performance at a church party, he got back into the business. “I started getting calls to do birthday parties and such. The more serious it got, the more serious I got,” Carter said. Homecoming attendees will get to see Cart-

er in four or five different costumes and a Broadway Wig Company Elvis wig. He watched All Shook Up on Broadway and called ACU as soon as he heard the Homecoming Musical choice. “I get a lot of kick out of [performing]. It’s just a whole lot of fun,” Carter said. “Some people don’t like Elvis, and that’s fine. I tell people up front I don’t live his lifestyle.” Spectators who do not see the grand marshal will have plenty more opportunities to get a taste of Elvis. “All the floats this year were encouraged to choose an Elvis song and incorporate it into their float,” said Samantha Adkins, coordinator of alumni projects. “It will be interesting.” The parade will begin at 9:30 a.m. and is scheduled to end by 10:30 a.m. at the latest. Eighteen floats and other entries will file down East North 16th Street and Campus Court, spreading Wildcat pride. Five judges will decide the winners of the traditional float See

As several departments plan on moving to the Bob Hunter Welcome Center at the end of the semester, an effort to reorganize some of the departments’ staff positions and responsibilities is currently under consideration. One such department that will be reorganized is the Department of Physical Resources

and its director of which is leaving at the end of the month. Bob Nevill, director of Physical Resources, Nevill has worked at ACU for nearly 14 years, the last four at his current position. He served as the director of com-

puting and network services for his first decade at ACU. “I do believe in the mission of ACU; the time I have spent here has been the best,” Nevill said. “I would not trade anything for the 14 years I’ve spent here.” During his time in the computing and network services department, Nevill was involved with setting up the campus-wide network, installing the Enterprise software

that includes Banner and helping in early Web development. When he switched to Physical Resources, he worked with contractors and oversaw the construction of the Conflict Resolution Center, the Education Building, Barret Hall, the Lunsford Walking Trail, the Bob Hunter Welcome Center, the artificial turf at the football practice field, the Jacob’s Dream statue and renovations to the “World Famous Bean”

and Sikes Hall. “I’ve been really fortunate to be part of a growing and improving environment rather than a maintaining one,” Nevill said. “We do maintain and we take a lot of pride and that, but the real excitement is the change part. It’s been fun.” Scot Colley, associate director of Physical Resources, will be taking over Nevill’s responsibilities when he leaves on Oct. 31. During his career,

Nevill worked as a consultant, a cable-television station manager, city manager and a technical analyst for a military aircraft manufacturer. He is still looking for his next career choice. “There’s no question there’s something very special about ACU, its mission and its people,” Nevill said. “Unlike a lot of other places, See

Online Poll : Log onto www.acuoptimist.com or www.youtube.com/acuvideo to see weekly News casts and Sports casts from the JMC Network News Team and videos profiling various events and stories around campus and Abilene.

What is your favorite part of Homecoming?

a. The football game. b. The parade and carnival. c. The musical. d. Seeing all my old friends.

Serving the ACU community since 1912 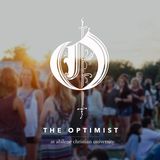