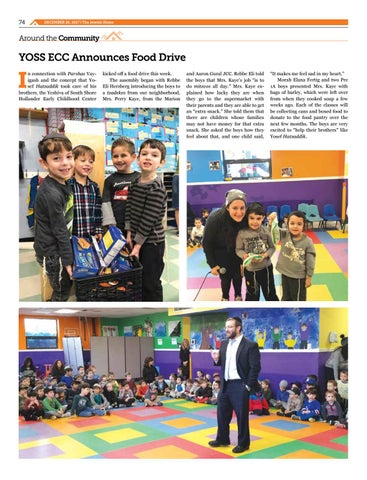 n connection with Parshas Vayigash and the concept that Yosef Hatzaddik took care of his brothers, the Yeshiva of South Shore Hollander Early Childhood Center

kicked off a food drive this week. The assembly began with Rebbe Eli Herzberg introducing the boys to a tzadekes from our neighborhood, Mrs. Perry Kaye, from the Marion

and Aaron Gural JCC. Rebbe Eli told the boys that Mrs. Kaye’s job “is to do mitzvos all day.” Mrs. Kaye explained how lucky they are when they go to the supermarket with their parents and they are able to get an “extra snack.” She told them that there are children whose families may not have money for that extra snack. She asked the boys how they feel about that, and one child said,

“It makes me feel sad in my heart.” Morah Elana Fertig and two Pre 1A boys presented Mrs. Kaye with bags of barley, which were left over from when they cooked soup a few weeks ago. Each of the classes will be collecting cans and boxed food to donate to the food pantry over the next few months. The boys are very excited to “help their brothers” like Yosef Hatzaddik.