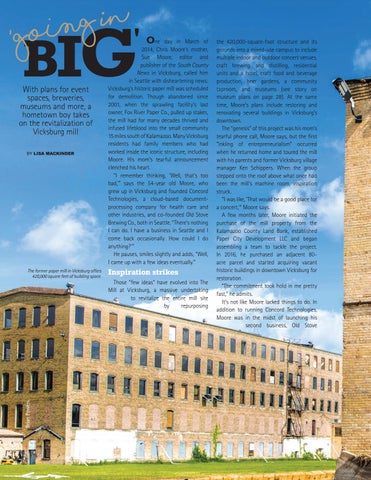 day in March of 2014, Chris Moore’s mother, Sue Moore, editor and publisher of the South County News in Vicksburg, called him in Seattle with disheartening news: Vicksburg’s historic paper mill was scheduled for demolition. Though abandoned since 2001, when the sprawling facility’s last owner, Fox River Paper Co., pulled up stakes, the mill had for many decades thrived and infused lifeblood into the small community 15 miles south of Kalamazoo. Many Vicksburg residents had family members who had worked inside the iconic structure, including Moore. His mom’s tearful announcement clenched his heart. “I remember thinking, ‘Well, that’s too bad,’” says the 54-year old Moore, who grew up in Vicksburg and founded Concord Technologies, a cloud-based documentprocessing company for health care and other industries, and co-founded Old Stove Brewing Co., both in Seattle. “There’s nothing I can do. I have a business in Seattle and I come back occasionally. How could I do anything?’” He pauses, smiles slightly and adds, “Well, I came up with a few ideas eventually.”

With plans for event spaces, breweries, museums and more, a hometown boy takes on the revitalization of Vicksburg mill

Those “few ideas” have evolved into The Mill at Vicksburg, a massive undertaking to revitalize the entire mill site by repurposing

the 420,000-square-foot structure and its grounds into a mixed-use campus to include multiple indoor and outdoor concert venues, craft brewing and distilling, residential units and a hotel, craft food and beverage production, beer gardens, a community taproom, and museums (see story on museum plans on page 28). At the same time, Moore’s plans include restoring and renovating several buildings in Vicksburg’s downtown. The “genesis” of this project was his mom’s tearful phone call, Moore says, but the first “inkling of entrepreneurialism” occurred when he returned home and toured the mill with his parents and former Vicksburg village manager Ken Schippers. When the group stepped onto the roof above what once had been the mill’s machine room, inspiration struck. “I was like, ‘That would be a good place for a concert,’” Moore says. A few months later, Moore initiated the purchase of the mill property from the Kalamazoo County Land Bank, established Paper City Development LLC and began assembling a team to tackle the project. In 2016, he purchased an adjacent 80acre parcel and started acquiring vacant historic buildings in downtown Vicksburg for restoration. “The commitment took hold in me pretty fast,” he admits. It’s not like Moore lacked things to do. In addition to running Concord Technologies, Moore was in the midst of launching his second business, Old Stove

The revitalization of the Vicksburg paper mill site, favorite haunted places, 'happy' produce at Soil Friends, the art of photosynthesis, me...

The revitalization of the Vicksburg paper mill site, favorite haunted places, 'happy' produce at Soil Friends, the art of photosynthesis, me...