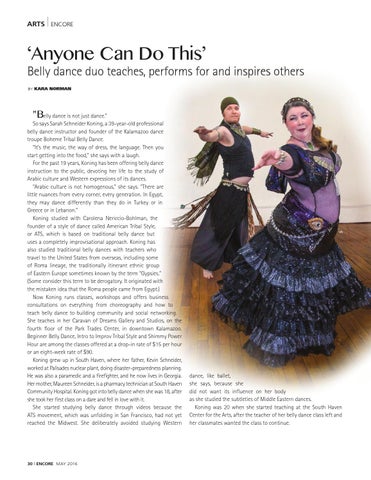 ‘Anyone Can Do This’

Belly dance duo teaches, performs for and inspires others by

"Belly dance is not just dance.”

So says Sarah Schneider Koning, a 39-year-old professional belly dance instructor and founder of the Kalamazoo dance troupe Boheme Tribal Belly Dance. “It’s the music, the way of dress, the language. Then you start getting into the food,” she says with a laugh. For the past 19 years, Koning has been offering belly dance instruction to the public, devoting her life to the study of Arabic culture and Western expressions of its dances. “Arabic culture is not homogenous,” she says. “There are little nuances from every corner, every generation. In Egypt, they may dance differently than they do in Turkey or in Greece or in Lebanon.” Koning studied with Carolena Nericcio-Bohlman, the founder of a style of dance called American Tribal Style, or ATS, which is based on traditional belly dance but uses a completely improvisational approach. Koning has also studied traditional belly dances with teachers who travel to the United States from overseas, including some of Roma lineage, the traditionally itinerant ethnic group of Eastern Europe sometimes known by the term “Gypsies.” (Some consider this term to be derogatory. It originated with the mistaken idea that the Roma people came from Egypt.) Now Koning runs classes, workshops and offers business consultations on everything from choreography and how to teach belly dance to building community and social networking. She teaches in her Caravan of Dreams Gallery and Studios, on the fourth floor of the Park Trades Center, in downtown Kalamazoo. Beginner Belly Dance, Intro to Improv Tribal Style and Shimmy Power Hour are among the classes offered at a drop-in rate of $15 per hour or an eight-week rate of $90. Koning grew up in South Haven, where her father, Kevin Schneider, worked at Palisades nuclear plant, doing disaster-preparedness planning. He was also a paramedic and a firefighter, and he now lives in Georgia. Her mother, Maureen Schneider, is a pharmacy technician at South Haven Community Hospital. Koning got into belly dance when she was 18, after she took her first class on a dare and fell in love with it. She started studying belly dance through videos because the ATS movement, which was unfolding in San Francisco, had not yet reached the Midwest. She deliberately avoided studying Western

dance, like ballet, she says, because she did not want its influence on her body as she studied the subtleties of Middle Eastern dances. Koning was 20 when she started teaching at the South Haven Center for the Arts, after the teacher of her belly dance class left and her classmates wanted the class to continue.