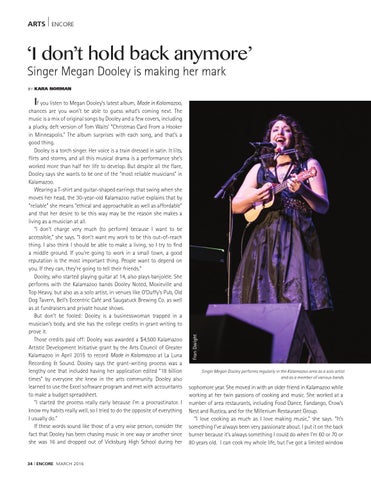 f you listen to Megan Dooley’s latest album, Made in Kalamazoo, chances are you won’t be able to guess what’s coming next. The music is a mix of original songs by Dooley and a few covers, including a plucky, deft version of Tom Waits’ “Christmas Card From a Hooker in Minneapolis.” The album surprises with each song, and that’s a good thing. Dooley is a torch singer. Her voice is a train dressed in satin. It lilts, flirts and storms, and all this musical drama is a performance she’s worked more than half her life to develop. But despite all the flare, Dooley says she wants to be one of the “most reliable musicians” in Kalamazoo. Wearing a T-shirt and guitar-shaped earrings that swing when she moves her head, the 30-year-old Kalamazoo native explains that by “reliable” she means “ethical and approachable as well as affordable” and that her desire to be this way may be the reason she makes a living as a musician at all. “I don’t charge very much (to perform) because I want to be accessible,” she says. “I don’t want my work to be this out-of-reach thing. I also think I should be able to make a living, so I try to find a middle ground. If you’re going to work in a small town, a good reputation is the most important thing. People want to depend on you. If they can, they’re going to tell their friends.” Dooley, who started playing guitar at 14, also plays banjolele. She performs with the Kalamazoo bands Dooley Noted, Moxieville and Top Heavy, but also as a solo artist, in venues like O’Duffy’s Pub, Old Dog Tavern, Bell’s Eccentric Café and Saugatuck Brewing Co. as well as at fundraisers and private house shows. But don’t be fooled: Dooley is a businesswoman trapped in a musician’s body, and she has the college credits in grant writing to prove it. Those credits paid off: Dooley was awarded a $4,500 Kalamazoo Artistic Development Initiative grant by the Arts Council of Greater Kalamazoo in April 2015 to record Made in Kalamazoo at La Luna Recording & Sound. Dooley says the grant-writing process was a lengthy one that included having her application edited “18 billion times” by everyone she knew in the arts community. Dooley also learned to use the Excel software program and met with accountants to make a budget spreadsheet. “I started the process really early because I’m a procrastinator. I know my habits really well, so I tried to do the opposite of everything I usually do.” If these words sound like those of a very wise person, consider the fact that Dooley has been chasing music in one way or another since she was 16 and dropped out of Vicksburg High School during her

Singer Megan Dooley performs regularly in the Kalamazoo area as a solo artist and as a member of various bands.

sophomore year. She moved in with an older friend in Kalamazoo while working at her twin passions of cooking and music. She worked at a number of area restaurants, including Food Dance, Fandango, Crow’s Nest and Rustica, and for the Millenium Restaurant Group. “I love cooking as much as I love making music,” she says. “It’s something I’ve always been very passionate about. I put it on the back burner because it’s always something I could do when I’m 60 or 70 or 80 years old.  I can cook my whole life, but I’ve got a limited window