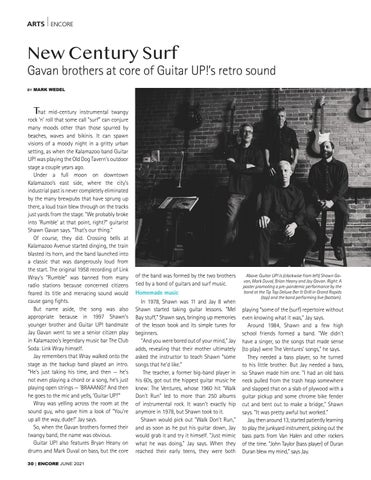 Gavan brothers at core of Guitar UP!’s retro sound by

rock &#39;n&#39; roll that some call &quot;surf&quot; can conjure many moods other than those spurred by beaches, waves and bikinis. It can spawn visions of a moody night in a gritty urban setting, as when the Kalamazoo band Guitar UP! was playing the Old Dog Tavern&#39;s outdoor stage a couple years ago. Under a full moon on downtown Kalamazoo’s east side, where the city’s industrial past is never completely eliminated by the many brewpubs that have sprung up there, a loud train blew through on the tracks just yards from the stage. &quot;We probably broke into &#39;Rumble&#39; at that point, right?&quot; guitarist Shawn Gavan says. &quot;That&#39;s our thing.&quot; Of course, they did. Crossing bells at Kalamazoo Avenue started dinging, the train blasted its horn, and the band launched into a classic that was dangerously loud from the start. The original 1958 recording of Link Wray&#39;s &quot;Rumble&quot; was banned from many radio stations because concerned citizens feared its title and menacing sound would cause gang fights. But name aside, the song was also appropriate because in 1997 Shawn&#39;s younger brother and Guitar UP! bandmate Jay Gavan went to see a senior citizen play in Kalamazoo&#39;s legendary music bar The Club Soda: Link Wray himself. Jay remembers that Wray walked onto the stage as the backup band played an intro. &quot;He&#39;s just taking his time, and then — he&#39;s not even playing a chord or a song, he&#39;s just playing open strings — &#39;BRAAANG!&#39; And then he goes to the mic and yells, &#39;Guitar UP!&#39;&quot; Wray was yelling across the room at the sound guy, who gave him a look of &quot;You&#39;re up all the way, dude!&quot; Jay says. So, when the Gavan brothers formed their twangy band, the name was obvious. Guitar UP! also features Bryan Heany on drums and Mark Duval on bass, but the core 30 | ENCORE JUNE 2021

of the band was formed by the two brothers tied by a bond of guitars and surf music. Homemade music In 1978, Shawn was 11 and Jay 8 when Shawn started taking guitar lessons. &quot;Mel Bay stuff,&quot; Shawn says, bringing up memories of the lesson book and its simple tunes for beginners. &quot;And you were bored out of your mind,&quot; Jay adds, revealing that their mother ultimately asked the instructor to teach Shawn “some songs that he&#39;d like.” The teacher, a former big-band player in his 60s, got out the hippest guitar music he knew: The Ventures, whose 1960 hit &quot;Walk Don&#39;t Run&quot; led to more than 250 albums of instrumental rock. It wasn&#39;t exactly hip anymore in 1978, but Shawn took to it. Shawn would pick out &quot;Walk Don&#39;t Run,&quot; and as soon as he put his guitar down, Jay would grab it and try it himself. &quot;Just mimic what he was doing,&quot; Jay says. When they reached their early teens, they were both

Above: Guitar UP! is (clockwise from left) Shawn Gavan, Mark Duval, Brian Heany and Jay Gavan. Right: A poster promoting a pre-pandemic performance by the band at the Tip Top Deluxe Bar &amp; Grill in Grand Rapids (top) and the band performing live (bottom).

playing “some of the (surf) repertoire without even knowing what it was,&quot; Jay says. Around 1984, Shawn and a few high school friends formed a band. &quot;We didn&#39;t have a singer, so the songs that made sense (to play) were The Ventures&#39; songs,&quot; he says. They needed a bass player, so he turned to his little brother. But Jay needed a bass, so Shawn made him one. &quot;I had an old bass neck pulled from the trash heap somewhere and slapped that on a slab of plywood with a guitar pickup and some chrome bike fender cut and bent out to make a bridge,&quot; Shawn says. &quot;It was pretty awful but worked.&quot; Jay, then around 13, started patiently learning to play the junkyard instrument, picking out the bass parts from Van Halen and other rockers of the time. &quot;John Taylor (bass player) of Duran Duran blew my mind,&quot; says Jay.

Southwest Michigan Magazine: See Your Town Like a Tourist issue invites you to discover the world hidden in plain sight, City parks with fascinating histories, discover hidden treasures around town, Doing good is a great way to see wild spaces, The Gavan brothers are at the core of Guitar Up!'s retro, upbeat sound, Meet Jane Ghosh the Discover Kalamazoo CEO and much much more.