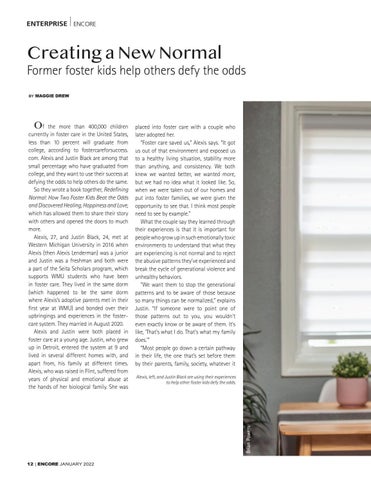 placed into foster care with a couple who later adopted her. “Foster care saved us,” Alexis says. “It got us out of that environment and exposed us to a healthy living situation, stability more than anything, and consistency. We both knew we wanted better, we wanted more, but we had no idea what it looked like. So, when we were taken out of our homes and put into foster families, we were given the opportunity to see that. I think most people need to see by example.&quot; What the couple say they learned through their experiences is that it is important for people who grow up in such emotionally toxic environments to understand that what they are experiencing is not normal and to reject the abusive patterns they&#39;ve experienced and break the cycle of generational violence and unhealthy behaviors. &quot;We want them to stop the generational patterns and to be aware of those because so many things can be normalized,” explains Justin. “If someone were to point one of those patterns out to you, you wouldn&#39;t even exactly know or be aware of them. It&#39;s like, &#39;That&#39;s what I do. That&#39;s what my family does.&#39;” “Most people go down a certain pathway in their life, the one that’s set before them by their parents, family, society, whatever it Alexis, left, and Justin Black are using their experiences to help other foster kids defy the odds.

f the more than 400,000 children currently in foster care in the United States, less than 10 percent will graduate from college, according to fostercareforsuccess. com. Alexis and Justin Black are among that small percentage who have graduated from college, and they want to use their success at defying the odds to help others do the same. So they wrote a book together, Redefining Normal: How Two Foster Kids Beat the Odds and Discovered Healing, Happiness and Love, which has allowed them to share their story with others and opened the doors to much more. Alexis, 27, and Justin Black, 24, met at Western Michigan University in 2016 when Alexis (then Alexis Lenderman) was a junior and Justin was a freshman and both were a part of the Seita Scholars program, which supports WMU students who have been in foster care. They lived in the same dorm (which happened to be the same dorm where Alexis’s adoptive parents met in their first year at WMU) and bonded over their upbringings and experiences in the fostercare system. They married in August 2020. Alexis and Justin were both placed in foster care at a young age. Justin, who grew up in Detroit, entered the system at 9 and lived in several different homes with, and apart from, his family at different times. Alexis, who was raised in Flint, suffered from years of physical and emotional abuse at the hands of her biological family. She was

Southwest Michigan's Magazine: KVCC's president L. Marshall Washington invokes his passion for community and superheros in his leadership; Foster kids co-author book and build a business to help others defy the odds; How local theater companies are keeping actors and audiences safe in the era of Covid-19; Meet Lia Gaggino who's podcast is spurring conversations about kids' mental and behavioral health, an extended arts section, events of note and much more.