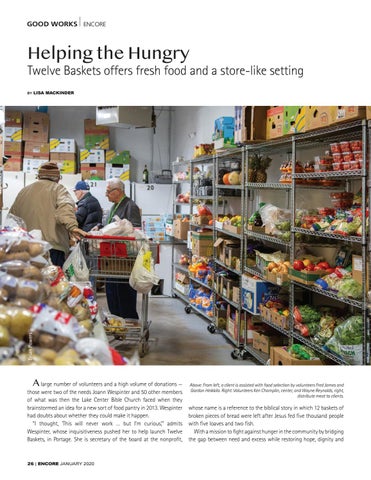 large number of volunteers and a high volume of donations — those were two of the needs Joann Wespinter and 50 other members of what was then the Lake Center Bible Church faced when they brainstormed an idea for a new sort of food pantry in 2013. Wespinter had doubts about whether they could make it happen. “I thought, ‘This will never work … but I’m curious,’” admits Wespinter, whose inquisitiveness pushed her to help launch Twelve Baskets, in Portage. She is secretary of the board at the nonprofit,

Above: From left, a client is assisted with food selection by volunteers Fred James and Gordon Heikkila. Right: Volunteers Ken Champlin, center, and Wayne Reynolds, right, distribute meat to clients.

whose name is a reference to the biblical story in which 12 baskets of broken pieces of bread were left after Jesus fed five thousand people with five loaves and two fish. With a mission to fight against hunger in the community by bridging the gap between need and excess while restoring hope, dignity and