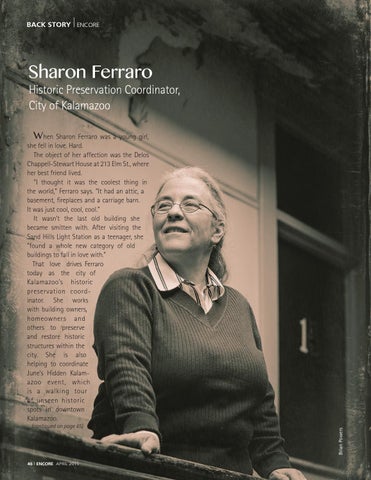 Historic Preservation Coordinator, City of Kalamazoo When Sharon Ferraro was a young girl,

she fell in love. Hard. The object of her affection was the Delos Chappell-Stewart House at 213 Elm St., where her best friend lived. “I thought it was the coolest thing in the world,” Ferraro says. “It had an attic, a basement, fireplaces and a carriage barn. It was just cool, cool, cool.” It wasn’t the last old building she became smitten with. After visiting the Sand Hills Light Station as a teenager, she “found a whole new category of old buildings to fall in love with.” That love drives Ferraro today as the city of Kalamazoo’s historic preservation coordinator. She works with building owners, homeowners and others to preserve and restore historic structures within the city. She is also helping to coordinate June’s Hidden Kalamazoo event, which is a walking tour of unseen historic spots in downtown Kalamazoo.